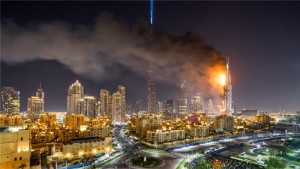 Millions of people around the world have welcomed in the year 2016 on high security alert, with train stations in Germany evacuated over an “imminent threat” and fireworks canceled in Paris and Brussels, while huge fires ripped through a Dubai hotel and destroyed 1,000 homes in the Philippines. Aljazeera reports:

Only hours before the New Year celebration in Germany, police shut down two main train stations in the city of Munich after receiving “very concrete information” from the intelligence service of a friendly country that the Islamic State of Iraq and the Levant (ISIL) group had planned to carry out “suicide attacks” in the southern city on New Year’s Eve.

“I think this was the right decision because I believe that we cannot take risks regarding such concrete threats about concrete places and concrete times,” Bavaria Interior Minister Joachim Herrmann told a news conference on Friday. As of 0545 GMT on Friday, the two train stations have reopened, according to Al Jazeera’s Dominic Kane, who was reporting fro Berlin.

Munich police chief Hubertus Andrae said ISIL had planned to use suicide bombers in the attack. Despite police warnings to stay away from big crowds, thousands of people were on the streets of Munich at midnight to welcome the new year with fireworks.

Security forces in many capitals around the world were on raised alert after a year of violent attacks, the biggest of which killed 130 in Paris in November and was claimed by ISIL. In Europe, terror fears also loomed large, with firework displays canceled in Brussels and Paris. More than 100,000 police were deployed throughout France to guard celebrations, as defiant Parisians turned out on the Champs Elysees to greet 2016 in the biggest public gatherings since the November 13 attacks.