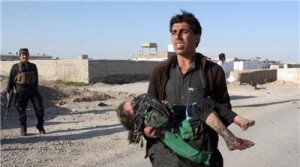 The number of Afghan civilians killed and wounded surpassed 11,000 in 2015 – the highest number recorded since the US-led invasion more than 14 years ago. The United Nations said in its annual report released on Sunday there were 3,545 civilian fatalities and 7,457 people wounded with children paying a particularly heavy toll, as Afghan security forces faced a surge in attacks by the Taliban and other armed groups.

The total of 11,002 civilian casualties marked a four percent rise over 2014, the previous record high, the report said. One-in-four casualties was a child, while one-in-10 was female, it said, with the UN’s special representative for Afghanistan Nicholas Haysom calling the figures “unacceptable”. “We call on those inflicting this pain on the people of Afghanistan to take concrete action to protect civilians and put a stop to the killing and maiming of civilians in 2016,” said Haysom.

The report said “anti-government elements” were responsible for the most harm, causing 62 percent of all civilian casualties. Those killed and wounded by “pro-government forces” represented 17 percent of the record figure. “Unprecedented numbers of children were needlessly killed and injured last year,” said Danielle Bell, the UN’s director of human rights in Afghanistan. “Other children suffered the loss of parents … one in 10 casualties was a women.”

The report said residents in northern and southern Afghanistan were particularly vulnerable as the Taliban and other armed groups intensified assaults on government installations and foreign forces. In a statement on Sunday, the Afghan Taliban rejected the UN report, calling it “one-sided” and “biased”.