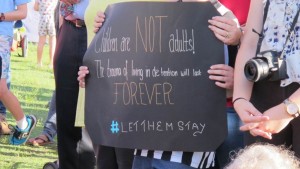 Dozens of rallies have taken place across Australia as protesters called on the government to stop the deportation of scores of asylum seekers after a failed legal challenge in the High Court last week. Monday’s demonstrations came as five state and territory ministers urged Australian Prime Minister Malcolm Turnbull to let the 267 refugees stay in the country.

The group of asylum seekers, including 37 babies who were born in Australia, were brought to the country from Manus Island and Nauru for medical treatment. They now face deportation to offshore centres on the islands with only 72 hours’ notice after the High Court ruled that they could not stay in Australia.

“The High Court decision was disappointing but the public response has been truly incredible,” said Daniel Webb, director of Legal Advocacy from the Human Rights Law Centre, who had brought the legal challenge to the High Court. “Doctors, churches and the UN have all urged Turnbull to let the 267 people stay and now state and territory leaders around the country are reminding us what strong moral leadership looks like.”

Alireza Jahangiriyani is among the asylum seekers facing deportation, along with his sister and his 69-year-old mother. Having been both to Nauru and Manus Island, he travelled with his sister to Australia from Nauru early last year to accompany their mother, who needed urgent medical care. “I’m a 27-year-old man who has lost his mental and emotional strength,” Jahangiriyani told Al Jazeera via email from a detention centre in Darwin, Australia.