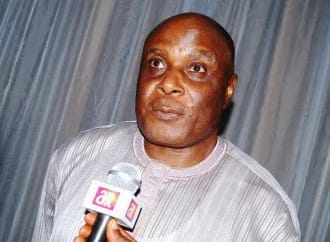 A Former Governor of Cross River State, Mr. Clement Ebri, has advised President Muhammadu Buhari to declare a state of emergency on the economy.
Ebri, who was governor of Cross River State from 1991 to 1993, said the proposed emergency, which should be backed by a law, would give the president sweeping powers to tackle headlong, what he termed economic depression, currently bedeviling the country.
Speaking with reporters in Calabar, the Cross River capital yesterday, the ex-governor said: “Nigeria’s economy is facing an abnormal situation, and therefore requires abnormal solution”.
He added: “The situation demands drastic measures, the President should declare a state of economic emergency on the nation, and strengthen it with a bill which should be passed into law by the National Assembly. We are not in ordinary times, the naira is losing its value on a daily basis and the nation’s economy is in a bad shape. An economic emergency will give the President powers to deal with the situation, thereby avoiding unnecessary encumbrances and bottlenecks that constituted stumbling blocks towards the efforts of the President at addressing the problems”.
Ebri suggested the President should establish a National Economic Recovery Fund (NERF), backed by law, to mobilise funds from patriotic Nigerians for sustenance of the economy.
According to him, “This should be part of the National Emergency Bill to be placed before the National Assembly. The budget alone cannot fix the economic problems afflicting the nation. The emergency act will be best suited to address the economic challenges”.
He noted that an economy emergency law would give the president powers to explore other means, and recover looted funds from those indicted, without going through the lengthy process of litigation.
Ebri, who was one of the recent defectors to the All Progressives Congress (APC), stressed that “in most cases, the lengthy litigation ends up frustrating efforts at recovering loot tracked and located”.
On the crashing value of the naira against the dollar and other major world currencies, Ebri said the Federal Government should adopt policies to address the scarcity of international currencies, especially the dollar.
He suggested that the policy where the Central Bank of Nigeria (CBN) no longer sells dollars to the Bureau de Change should be reversed.
The ex-governor advised that the CBN should rather introduce periodic sale of the dollar to the BDCs, preferable twice a month, and monitor them.
“The Federal Government should inject recovered funds into the economy. Instead of keeping the money in escrow accounts, they can be applied in ways that would address the scarcity of the dollar and other international currencies, thereby shoring up the value of the naira.
“To avoid leakages, the recovered funds, and whatever they are used for should be properly documented and accounted for to avoid a situation where they will be looted by unpatriotic Nigerians still in the system”, he said.