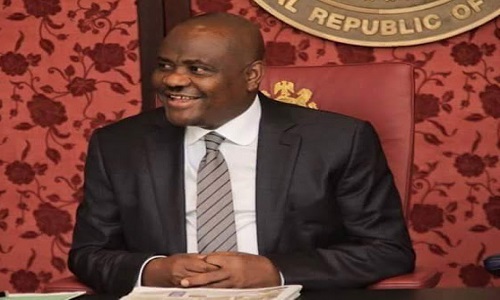 Governor Nyesom Wike of Rivers State said in Port Harcourt on Sunday that he wouldn’t have taken part in a re-run governorship election in the state had the Supreme Court delivered a different verdict.

Wike’s election as governor of Rivers State was nullified by the Election Petition Tribunal and the Court of Appeal before the apex court set aside the rulings of the lower courts last Wednesday, upholding his victory in the April 11 governorship poll.

Speaking at the thanksgiving service to mark his victory in the state capital, Wike said that he had called few of his supporters that he was not going to re-contest because of the expected bloodshed that would have followed the election.

He, however, commended his legal team, which he said consisted of 21 Senior Advocates of Nigeria.

According to Wike, “Blood would have flown if the election was going to hold again. Many people were being arrested.

“I would call the security men, asking why they would say they were going to make sure there won’t be any problem.

“So I called some people including the Chairman of the PDP, Uche Secondus that I was not going to run again. They said why and I explained that if I did, many people would die”.

The governor recalled that he was unsettled by the defection of some of his close allies to the All Progressives Congress, APC, saying it gave him high blood pressure.

“If you are not a politician, stand where you are because you will collapse”, he told the gathering.

He added that “On the day of the judgment, we were sitting in the parlour when my CSO came to tell me that he received a call from Abuja that I was going to lose, and I would be arrested.

“I asked him to get out. He said whether there was nothing we could do, I said he should leave.

“I pray that my enemy should continue to have permanent high blood pressure. I wouldn’t pray that God will heal them.

“My won has come down now, and for seven months it was high. It is time for their own to rise.

“Members of the Assembly (whose elections were nullified) would come and cry here.  Sen. [George] Sekibo would come here and pray that I should win first and that my own is better.

“Some of them sold all they had to win the election, but their elections were nullified. Some just married and told their wives that it would be better but only to be sacked seven months later”.

Wike also said that his government would not support the ongoing war against corruption because it was one-sided.

Wike said, “We would not support the fight against corruption. People took our money from the state, and we wrote to the police asking them to go and make a statement, nothing has come out of it.

“We won’t take anybody to the EFCC because I know what would happen. We know how to fight our own way. We won’t support that war against corruption that they are doing”.