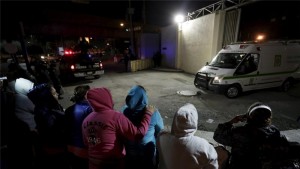 At least 52 people were killed and 12 people wounded in a prison riot in the Mexican city of Monterrey, the governor of the northeastern state of Nuevo Leon has said. Governor Jaime Rodriguez said the fighting broke out before midnight on Wednesday night, in two areas of the Topo Chico prison, between a faction of the infamous Zetas gang and another group.

“During the clash several prisoners set fire to the food storage and sleeping areas,” Rodriguez told reporters at a press conference on Thursday. It was not immediately clear how the victims died, but Rodriguez said there was no gunfire. Al Jazeera’s Adam Raney, reporting from Mexico City, said: “The governor made a point of saying that no one had escaped; that this was not an escape attempt but it was this battle between two groups in the prison.”

Images broadcast by Milenio TV showed police vehicles patrolling the streets near the prison after unrest broke out in the early hours of Thursday local time.  Milenio TV reported that relatives who visited prisoners in the jail had heard gunshots and said a blaze had broken out. They also said they had seen inmates with burns and that authorities were hunting for escapees.

Witnesses said the fire broke out at about 12:30am (06:30 GMT) and appeared to have been extinguished shortly after sunrise, the Associated Press reported. Earlier, local media had said the casualties included inmates and prison guards. Families of the inmates rushed to the prison after reports of deaths. Some shook and kicked at the prison gates, demanding to be allowed in. “Police had to come out in riot gear and push these family members back,” Al Jazeera’s Raney said.