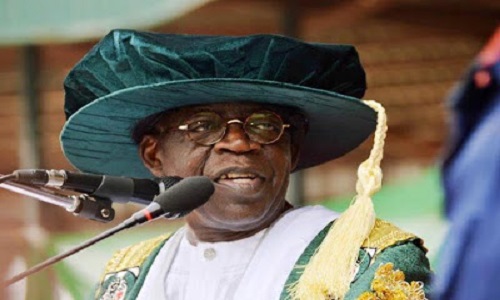 Former Lagos State Governor and national leader of the All Progressives Congress (APC), Asiwaju Bola Tinubu, yesterday challenged Nigerians to turn the country’s present socio-economic problems into opportunities for a desirable re-engineering of the economy.
Nigeria, according to him, has long stood in the corridor between greatness and failure, between progress and calamity and must now “summon the courage to take the bold steps and move in the direction”.
In a prepared speech he delivered at the 15-20th Convocation ceremony of the University of Abuja where he was conferred with a honorary doctorate degree in Business Administration (DBA, Honoris Causa), the APC chieftain said “We must reform and do so quickly and with alertness to the severity of the circumstances mounting around us”.
Tracing the country’s woes to past leadership, he said: “The ways in which we have grown accustomed to running this nation no longer suffice.
“If we are to continue as we have done over the years our malpractice will deliver us into the vice grip of national failure.
“That which we used to do then laugh at ourselves for our errant ways is no longer a joking matter. It is now fatal”.
Tinubu also unveiled APC’s plan to lift 20 per cent of Nigerians out of poverty within four years.
For this to happen, he said, the state must be a fulcrum for job creation and economic development that touches all Nigerians not just a narrow growth that benefits few people.
“Although confronted by multiple challenges, I believe this government has the chance and the mission to better our society and forge a new model for our national governance”, he said.
“We have demonstrated the courage and determination to change a non-performing government through a democratic election. This electoral success has brought new challenges. These challenges are numerous and we must confront them with an even greater courage than that which saw us through the election.
“We shall do this by implementing a national industrial policy linked to a national infrastructural plan and a national employment strategy.
“Before our children can dream of a university education they must first enjoy the foundational education of primary school.
“Our position is that we make a special effort to draw all children to school, particularly the poor. We cannot afford to allow poverty to keep children out of the classroom. If so we are suborning a life of ignorance and poverty for millions of our young ones.
“This progressive government is committed to providing all school-age children one free meal daily. This seems a simple thing. But it is also wise and prudent. A hungry student does not learn. If the child is too hungry too often, he stops attending school altogether.
“By this programme, students will more eagerly attend because their stomachs as well as their minds shall be fed. Parents will encourage children to attend because this will take the children off the streets while also alleviating pressure on the family to feed the children.
“This current leadership will anchor its efforts to re-build Nigeria on massive industrialization and the re-structuring of the economy to allow for growth. Then, will hope be rekindled for millions of our people and a country of great potentials and possibilities will emerge”.
Second Republic Vice President, Dr. Alex Ekwueme, was one of those conferred with honorary degrees.
His Doctor of Science (Honoris Causa) was received on his behalf by his daughter.
Others who bagged awards at the ceremony were: former Chief Justices of Nigeria, Justice Idris Kutigi, Doctor of Laws (LLD) and Justice Maryam Aloma Muktar, Doctor of Letters (Dlitt) – both (Honoris Causa) and Deputy Senate President, Ike Ekweremadu, who was conferred with a Honorary Doctorate degree in Law.
In his goodwill message on the occasion, visitor to the University, President Muhammadu Buhari, said that government alone could not meet the needs of higher education.
Represented by Director, Tertiary Education, Ministry of Education, Hajia Abdullahi Hindatu, the president encouraged private sector to invest more in research and development in the universities.
He said: “It is pertinent to emphasize on the quality of teaching and research in our universities”.
“Research should not be relegated to the background in our universities. I therefore urge Nigerian universities to ensure that the quality of the graduates produced compares with products from other universities globally”, the president said.
The University of Abuja Convocation witnessed the award of degrees to 25, 878 students.
According to the UniAbuja Vice Chancellor, Professor Michael Adikwu, 20, 461 received first degree in various fields while 1, 697 received postgraduate diploma.
Eight students bagged first class between 2008 – 2015 sessions.
The breakdown showed that 2, 324 were awarded with Second Class, Upper Division while 11, 180 were awarded Second Class Degrees, Lower Division.
Adikwu said that Nigeria’s road to sustainable economic development lied in the creative ability of citizens to turn adversities into opportunities.
The VC urged the graduating students to use personal initiatives to seize the opportunities that still abounded in the country for them to be self-employed.
The ceremony was attended by prominent Nigerians among them former Head of the Interim National Government, Chief Ernest Shonekan; a former interim national chairman of APC, Chief Bisi Akande; state governors; Minister of Information, Lai Mohammed; House of Representatives Leader, Femi Gbajabiamila;, Senator Abdullahi Adamu, a former Niger State governor, Dr. Mu’azu Aliyu; and Rep. James Faleke among others.