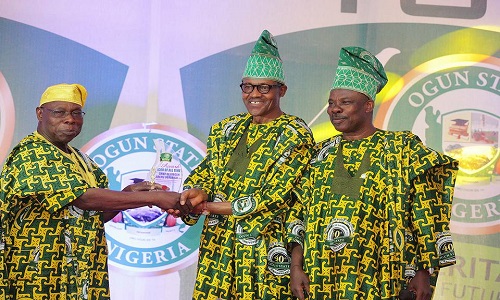 The Ogun State government yesterday honoured three prominent indigenes for their role in the creation of the state in 1976.

Also known as “Gateway to Nigeria”, Ogun was created in February 1976 from the old Western State.

Those honoured at a banquet organised at the emerging President Muhammadu Buhari Estate, Kobape in Abeokuta, the state capital were former President Olusegun Obasanjo, who was conferred with the “Icon of All Time” Award while renowned statistician, Prof. Biyi Afonja, bagged the Icon of Outstanding Service in public service.

Adebutu was honoured for his outstanding philanthropy that traversed beyond the state; Otudeko and Soyinka were honoured in absentia for their contribution towards the growth and development of society.

President Muhammadu Buhari, who was the guest of honour, presented the the “Icon of All Time” award to Obasanjo while Governor Ibikunle Amosun presented the other awards to Afonja and Olori Gbadebo.

Obasanjo was the Chairman of the Committee on the Creation of States established by the then Supreme Military Council (SMC) while the duo of Afonja and Olori Gbadebo were the only surviving members of the team, who worked for the state’s creation out of the Old Western State.

Obasanjo, who responded on behalf of the recipients, lauded the government for the honour.

The ex-president said he would support the Awujale of Ijebuland, Oba Sikiru Adetona, and others clamouring for the creation of Ijebu state on condition that the capital would be sited in Ikenne, the headquarters of Ikenne Local Government.

Obasanjo, who was reacting to Adetona’s subtle call for the creation of Ijebu state, said Ogun State was a seed planted 40 years ago by the SMC.

He also praised past rulers, describing them as lively stones upon which Amosun is building upon.

Obasanjo noted that Amosun had built “most nobly” upon what he met and prayed that the state would have grown better in the next 40 years than it had in the last 40 years.