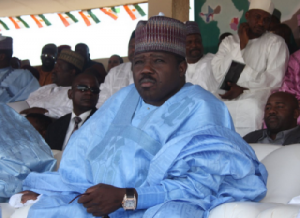 The decision was reached at an enlarged meeting of the PDP Governors’ Forum, the party’s Board of Trustees (BoT), the National Assembly Caucus, the party’s National Working Committee (NWC) and state caucuses.

Rising from the meeting, which was held at the Ondo State Governor’s Lodge, Asokoro, Abuja, the party leaders said the decision to allow Sheriff stay for three months was a unanimous one.

Addressing journalists after the meeting, Ondo State Governor, Dr. Olusegun Mimiko said the decision to stand by Sheriff was taken in the best interest of the party.

He said Sheriff had been mandated to put in motion preparations for the party’s national convention to elect new members of the NWC to run the party.

Also commenting on the outcome, the Acting Chairman of the BoT, Senator Walid Jibrin, announced the concurrence of the BoT with the decision.

According to him, Sheriff was given two weeks within which to produce a timetable for the next convention to be convened in May.

He expressed the optimism that the lingering crisis in the party would be resolved within three months.

On the rejection of Sheriff by the party’s ex -ministers, Mimiko said they are members of the state caucuses headed by chairmen of their various state chapters.

This, according to the governor, automatically makes them a party to the decision.

Mimiko, however, said the various party organs would still reach out to the ex-ministers, with the view to bringing them on board.