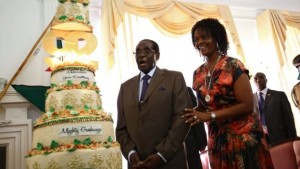 Zimbabwe’s ruling party has been criticised for hosting lavish 92nd birthday celebrations for President Robert Mugabe while swathes of the population face food shortages. The event reportedly cost almost $800,000 (£575,000). The opposition Movement for Democratic Change (MDC) called the celebrations “obscene”. Mr Mugabe has dominated Zimbabwe politics since independence from the UK in 1980.

The event, which was televised and featured schoolchildren reading poetry about the president, was held in the drought-stricken south eastern city of Masvingo. The elderly leader, accompanied by his wife Grace, released 92 balloons to kick off the event at the Great Zimbabwe monument, with tens of thousands of people attending.

In a speech, Mr Mugabe attacked Western donors, and said he would not accept “rotten, filthy” aid if it was contingent on Zimbabwe accepting same-sex marriages,the government-owned newspaper the Herald reported. But the opposition Movement for Democratic Change (MDC) said the celebrations were “ill-conceived”. Money used for the event should be used to import maize “to avert the impending starvation” in Masvingo and other areas, said Obert Gutu, a MDC spokesman.

Levin said he attended the rally as an observer, but ended up standing in between the Klansmen and the crowd of angry protesters to try to stem the violence. “I helped two Klansmen get out of the way,” said Levin.”I told the crowd: Dr [Martin Luther] King wouldn’t approve of this, please don’t harm these men.” After pushing a Klansman away from the angry mob, Levin said he asked him: “How does it feel that your life was just saved by a Jewish man?”