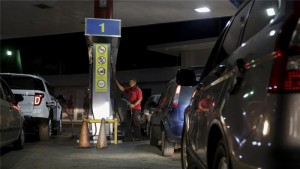 Venezuela’s president announced a currency devaluation and ramped up its petrol prices for the first time in about 20 years on Wednesday in an attempt to shield the country’s oil-dependent economy from collapse. President Nicolas Maduro announced that the pump price of premium gasoline would jump from just under 0.1 bolivars per litre to six bolivars (1.5 US cents to 95 cents)  – a 60-fold increase from its current level.

“This is a necessary action, for which I take responsibility,” Maduro said in a televised address. “The time has come to establish a system that guarantees access to hydrocarbons at a fair price but that also guarantees the funding of investment in producing that gasoline.”

Maduro also announced that the strongest of the country’s official exchange rates, used for essential goods like food and medicine, would weaken to 10 bolivars per US dollar from 6.3. Venezuela has the biggest known oil reserves in the world and has been practically giving gasoline away in recent years. But it has suffered from plunging world oil prices since mid-2014.

The move risks sparking protests in a volatile country where citizens are struggling with soaring inflation and shortages of basic goods such as cooking oil and toilet paper. A petrol price increase in 1989, which came at a time of economic crisis driven by low oil prices, spurred popular outrage that erupted into days of rioting that killed hundreds.

A subsequent increase in 1997 did not lead to protests, but late President Hugo Chavez nonetheless kept prices fixed during his 14 years in office even as high inflation eroded the value of fuel.  The economic measures come as Maduro fights for his political survival. Opposition leaders quickly dismissed Wednesday’s measures as insufficient to right the flagging economy.