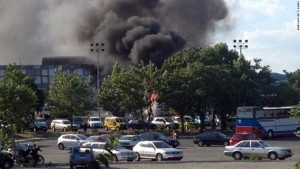 Two explosions have hit the Brussels Zaventem airport, killing at least one person and injuring others.

The explosions were reported on Tuesday morning, with witnesses saying wounded people were seen in the departures hall.

Smoke was seen rising from the terminal at Zaventem, the country’s main international airport.

The airport was evacuated and local trains to and from Zaventem closed down.

A government official told the Belgian public broadcaster that the incident was an attack. Emergency responders said several people were killed.

Local media reported that the blasts happened near the American Airlines check-in counters.