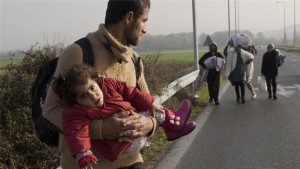 The number of refugees flowing into Europe has soared in the first two months of the year amid tighter borders and ongoing conflicts in the Middle East, prompting warnings from agencies and rights groups of a “looming humanitarian crisis”. On Tuesday, the UNHCR said that 131,724 people made the journey across the Mediterranean during January and February, with 122,637 refugees landing in Greece. “This is approaching the total for the first half of 2015, [when] 147,209 [arrived],” said UNHCR spokesman Adrian Edwards.

At least 418 refugees died on their way to Europe in the first two months of the year, compared with 428 in the same period last year, the International Organization for Migration (IOM) said. IOM estimated that of the 321 who died on the Eastern Mediterranean route, which ends in Greece, 77 were children – an average exceeding one child death per day.

Many predicted the number of refugees would rise to a new record in 2016. In 2015, more than one million refugees fled to Europe by sea. The IOM said: “With ten months [of 2016] left, it now appears likely that last year’s total will be surpassed, possibly before the end of the summer.”

Last Wednesday, in a bid to stem the flow, Austria and nine Balkan states agreed to grant entry only to those “in proved need of protection” – a move which sharply reduced the intake and effectively excluded refugees from Afghanistan, a country where civilian casualties reached a record 11,000 in 2015.