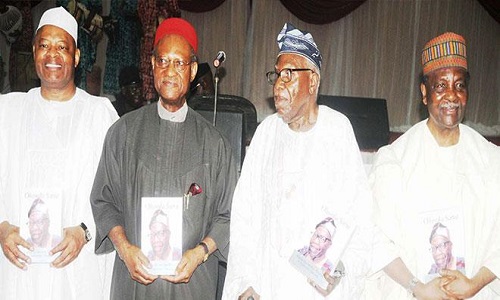 Former Secretary-General of the Commonwealth, Chief Emeka Anyaoku yesterday in Ibadan, the Oyo State capital, threw his weight behind President Muhammadu Buhari’s stand against the devaluation of the naira.
Anyaoku spoke at the presentation of Olusola Sanu’s memoirs: “Audacity on the Bound: A Diplomatic Odyssey”.
He called on Buhari to maintain his stance and assemble a team of economic experts on the issue.
Anyaoku, however, stressed the need to take the nation out of its economic crisis.
He, however, decried the exploitation of the Nigeria presidential system by new generation politicians, whom he blamed for the nation’s woes.
“I have worked with the old political leaders, who during their time were hardworking, brilliant and known for high integrity.
“The new generation has exploited the presidential system. The president, governors and local government chairmen now parade over 3,000 special advisers.
“Some state governors that cannot boast of strong revenue also have up to 30 advisers.
“A local government chairman now operates presidential system at council level”, he said.
Anyaoku who quoted copiously from the work, described the book as an instructive material for future generations.
He said Sanu was one of the brightest administrators in Nigeria, who lived a life of hard work and integrity
Similarly, Gen. Yakubu Gowon, ex-Head of State, hailed Sanu for his brilliant performances in the positions he occupied.
Gowon said the book would boost the capacity of young career diplomats.
“I am sure Sanu will never forget his exploits as an ambassador to Ethiopia”, he said.
The News Agency of Nigeria (NAN) reports that the book has 514 pages, divided into 21 chapters.