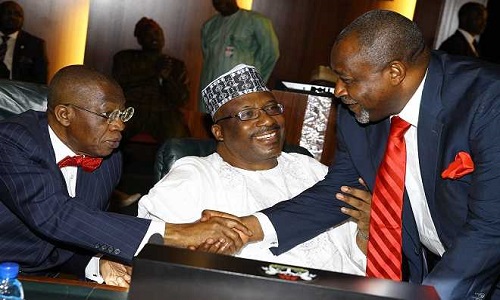 The Federal Executive Council will on Wednesday hold a special session to pay tribute to the late Minister of State for Labour, James Ocholi, SAN, who died alongside his wife and son in a ghastly car accident on Sunday.
The Special Adviser to the President on Media and Publicity, Mr. Femi Adesina, disclosed this to State House correspondents on Monday.
According to Adesina, the deceased, being an active member of the council, would be given his due tribute at the special session.
He said President Muhammadu Buhari, shocked by Ocholi’s sudden death, had described the accident that claimed his life and those of two other members of his family as a tragedy of monumental proportion.
Adesina said, “You can feel the soberness in the atmosphere. Everybody believes that this is a terrible tragedy.
“Mr. President paid glowing tribute to the departed. Their relationship dated back to the CPC days to the role he played in the APC merger.
“The president just concluded that it is a tragedy of monumental proportion.
“The late Ocholi will be given his dues. He was an active member of the Federal Executive Council.
“I recall that we shared laughter after the last meeting on some things that are hilarious. When I heard about the tragedy yesterday, that our last meeting came to my mind.
“So you can be sure that on Wednesday, the council will pay him his due tribute”.