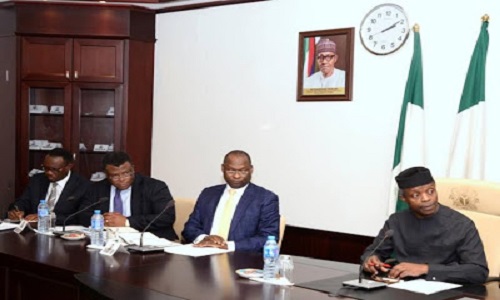 The All Progressives Congress-led federal government will create three million jobs in the next three years, starting from 2016, Vice President Yemi Osinbajo, SAN, has disclosed.

The jobs are to be created in the Technology, Wholesale and Retail, Construction and Agro-allied sectors of the Nigerian economy, the vice president added.

Making the disclosure in a Facebook post on his wall Wednesday, Mr. Osinbajo further stated that this year alone, over 700,000 private sector jobs will be created, majority of which will be in the Agro-allied sector.

Giving an insight into the mindset of the President Muhammadu Buhari administration, which he said is accountable to the Nigerian people, the vice president said whenever a policy is proposed, the number of jobs it would create for Nigerians is always the focus.

“The central focus of President Buhari’s administration is the creation of jobs. Every proposed policy begins with ‘how many jobs can this policy create?’”, he said.

The Facebook post read:
Today, I received the Strategic Framework and Implementation Plan on job creation and youth employment in Nigeria jointly packaged by the Job creation Unit of the Presidency, and the Nigerian Economic Summit Group, NESG.

Three million jobs would be created in the country within three years starting in 2016 especially in Technology, Wholesale & Retail, Construction and Agro-allied sectors of the Nigerian economy.

This year alone, over 700,000 private sector jobs will be created, majority of which will be in the Agro-allied sector.

This private sector-led job creation plan is different from the direct government jobs planned by the Buhari presidency which includes the 500,000 teaching jobs for unemployed graduates.

We are not unaware that this process of job creation is slow but President Muhammadu Buhari’s administration is addressing the constraints of regulatory and institutional delays in the business sector.

The Job Creation Unit was constituted at the behest of President Buhari to initiate the job creation plan. The National Economic Summit Group, private sector players, validated the plan and will be working together with the government to implement the job creation plans.

Together, we will get this right.
Together, Nigeria will prevail.