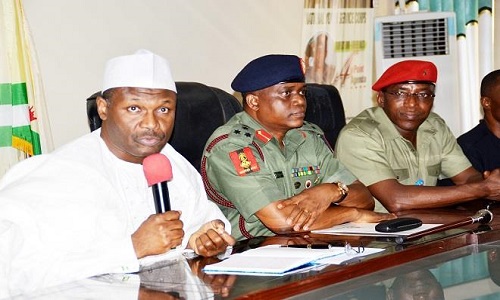 The Minister of Youth and Sports, Solomon Dalung, made the vow when he received the Chairman of the Independent National Electoral Commission (INEC), Prof. Mahmood Yakubu, who paid a condolence visit to the NYSC in Abuja, yesterday.

Dalung vowed severe punishment for those involved in the killing of the corps member.

The deceased, an indigene of Delta State with call-up number RV/15B/5539, who served at GCSS Ukpeliede, was shot dead by unknown gunmen in Ahoada West Local Government Area of Rivers state while on election duty.

The NYSC in a statement Monday, condemned the killing of the corps member as primitive, barbaric, and ungodly.
Speaking yesterday, the minister blamed the violence on the desperation of politicians who refused to play the game according to the rules.

He also described the violence that characterized the rerun elections in the state as a display of primitive political culture, promising that the government will bring the perpetrators to book.

Warning that acts of impunity would not be tolerated under the current administration of Change, Dalung described the murder as barbaric.

He said: “I want to use this opportunity to appeal to Nigerian politicians that in playing the game, officials for the match and spectators are not players.

“I observed that each time we play this our political game, our tentacles and anger are extended to the wrong persons. Politicians aspire to hold public office because they want to develop Nigeria.

“In doing this they are talking of protecting the life of every Nigerian. So, it is very bad and terrible that we cannot conduct ordinary election without conflict and crisis. Just to protect our interest, innocent people will lose their lives.

If they kill all Nigerians who would they govern? Are they going to rule animals?”

“At this point I am calling on all the major actors in the crisis in Rivers State to respect human life. They should remember that there is one person called God. They should stop ending people’s lives because of their tall ambitions. Federal Government will do everything to fish out the perpetrators”, he added.

Earlier, Director-General of the NYSC, Brig.-Gen. Johnson Olawumi, vowed that the scheme would not relent until the perpetrators were brought to justice and called on the Rivers State government and community leaders to unravel the killers.

“I want to use this avenue to call on the Rivers state government and the community leaders that they should do everything humanly possible to bring those who killed this young innocent man to book. We shall work with relevant agencies to ensure that the perpetrators of this heinous act are fished out and made to face the full wrath of the law”, he said.

In his remarks, INEC Chairman, Professor Yakubu described the visit as an unhappy one, saying “we are here with INEC Commissioners on a sincere condolence on the death of the NYSC member, Samuel Okonta.

“Also, we are glad to know that the other corps member, who could not be accounted for has been found alive, hale and hearty though we understand she was traumatised and unconscious. We thank God for His mercy.

“It is painful when a life is lost in the conduct of an election, no matter the grievances of those involved in the political contest. Nothing justifies the cold blooded murder of an innocent official conducting a legitimate national assignment intended to allow the citizens to freely choose their leaders.

“NYSC and INEC had been in this happy partnership which has tremendously helped in the management of our elections. I cannot imagine a successful conduct of an election in Nigeria without the partnership with the NYSC”.