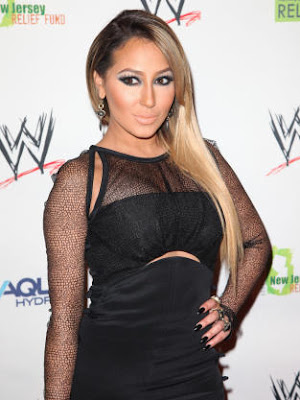 After dating for two years, the singer is now claiming her association with the Kardashian family damaged her career.

“To be stuck with that Kardashian label, that was so hurtful to me and to my career,” Adrienne told Latina magazine. “I probably realized that too late.”

Rob responded on social media with a curt “FDB,” which is an acronym for “F**ck dat b*tch.”

But despite the bad breakup blood, Adrienne has only nice things to say now that her ex is engaged to his love of less than three months, Blac Chyna….

“I think everybody deserves happiness and I think it’s just absolutely awesome. He looks like he’s so happy.”

But then, these words of congratulations sound very similar to the ones Blac Chyna’s ex, Tyga, offered. Tyga had said;

“Everybody deserves 2 be happy.”