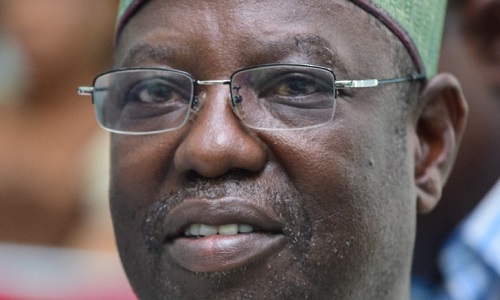 The Economic and Financial Crimes Commission, EFCC, on Tuesday arraigned a former Acting Director General of Nigeria Maritime Administration and Safety Agency, NIMASA, Haruna Baba Jauro, his brother in-law, Dauda Bistrus Bawa, on a 19-count charge of stealing and money laundering.
Mr. Jauro was arraigned alongside his company, Thlumbau Enterprises Limited, before Justice C.M.A Olantoregun of the Federal High Court Lagos.
Mr. Jauro was arrested by the EFCC based on its findings during the investigation of his predecessor, Patrick Akpobolokemi.
In the course of investigation, it was discovered that the former Acting DG while being the Executive Director, Finance, of the agency, received N156,477,500 as gratification from Mr. Akpobolokemi to allow the former DG and his cohorts embezzle large sums of monies from the agency, EFCC said in a statement.
The said monies were traced to Mr. Jauro’s company account, Thlumbau Enterprises Limited, which his brother in-law, the second accused person oversees, it said.
Mr. Jauro is said to have refunded N35, 000,000, being part of the money he collected from Mr. Akpobolokemi to the Federal Government.
One of the charge read, “that you Haruna Baba Jauro, Dr Dauda Bistrus Bawa and Thlumbau Enterprises Limited on or about the 6th day of January 2014, in Lagos within the jurisdiction of this honorable court did conspire among yourselves to commit an offense to wit: conversion of the sum of N156,477,500 ( One Hundred and Fifty Six Million, Four Hundred Seventy Seven Thousand, Five Hundred Naira Only) property of the Nigeria Maritime Administration and Safety Agency, knowing that the said sum were proceeds of stealing and thereby committed an offense contrary to section 18(a) of the Money Laundering Prohibition (Amendment) Act, 2012 and punishable under section 15(3) of the same Act”.
The accused persons pleaded not guilty after listening to the charge.
Rotimi Oyedepo, the prosecution counsel did not oppose the bail application filed by the counsel representing the accused persons.
Consequently, the accused persons were granted bail in the sum of N5, 000,000 (Five Million Naira) and two sureties in like sum. The sureties must be resident within the jurisdiction of the court and must present tax clearance for the last three years.
The case was adjourned to May 16 for trial.