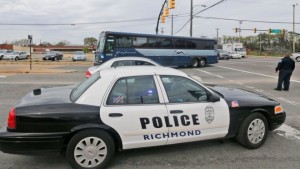 A gunman shot and killed a state trooper inside a Greyhound bus station in the US state of Virginia. Several Virginia state troopers were conducting a training exercise at the station when the gunman approached the trooper and shot him in the chest. Other troopers, who were in uniform at the time, then fired back and killed the gunman.

Two bystanders were hurt in the shooting and taken to a hospital with non-life threatening injuries. The Virginia State Police did not identify the gunman.  Najee Wilson, 18, of New Jersey was waiting for a bus when he heard gunshots.

“We heard a lot of people screaming,” Mr Wilson told the Associated Press. “It definitely was a scary experience.” The Greyhound station in Richmond is just west of the city’s downtown area. Greyhound issued a statement on Thursday afternoon, saying the Richmond bus station would be closed “until further notice”.