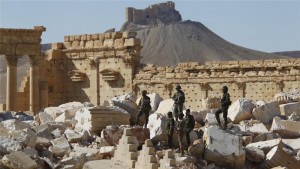 A mass grave containing 40 bodies has been discovered by the Syrian army in Palmyra after the city’s recapture from the Islamic State of Iraq and the Levant (ISIL), according to state news agency SANA.  The Syrian army, backed by a wave of Russian air strikes, retook the ancient city from ISIL, also known as ISIS, last week.

“A field source told a SANA reporter that as the engineering units and popular defence groups were combing the area, they uncovered the mass grave and managed to pull 25 corpses, three of them children and five others women, in Masakin al-Jahizia neighbourhood in the city,” a report on the news agency’s website said.

“Later, the source said that the number of bodies removed from the grave has reached 40 after pulling out 15 bodies, all of them belonging to women and children.” The Britain-based Syrian Observatory for Human Rights, which monitors the conflict through a network of activists on the ground, said that ISIL had killed several people and buried them in the grave.

Last week, the Syrian army said the city, home to some of the most extensive ruins of the Roman Empire, would become a “launchpad” for operations against ISIL strongholds in Raqqa and Deir Ezzor, which are further east across a vast expanse of desert. ISIL captured the city, also known as Tadmur, in May last year. It destroyed some ancient sites and used others to stage mass executions. More than 250,000 people have been killed during the war in Syria and millions have fled the country.