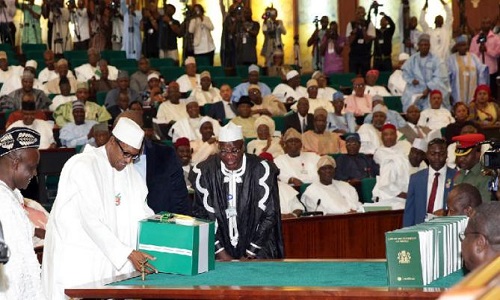 The Northern Elders Forum (NEF), yesterday decried the alleged marginalization of the North in the yet-to-be signed controversial 2016 budget.
The group said going by the provisions of the document, the North was being shortchanged and urged President Muhammadu Buhari to urgently address its concerns.
In a letter dated March 16, 2016 endorsed by its chairman, elder statesman and former Nigeria’s Permanent Representative to the United Nations, Alhaji Maitama Sule, and addressed to the president, the NEF said it consulted a broad spectrum of opinion leaders in the North before deciding to express cry out over the purported marginalization of the region in the 2016 budget.
The NEF, a group comprising notable personalities of northern extraction cutting across religious and ethnic backgrounds, argued that President Buhari ought to allocate massive projects to the North in the next three years to boost the economy of the area currently plagued by insurgency and massive destruction of lives and property.
According to the Forum, Federal Government’s allocation on recurrent expenditure in the budget was skewed against the North as 75 per cent of the civil service is made up of citizens from the three geopolitical zones in the South.
It also described Buhari’s cabinet as weak and urged him to immediately establish an Economic Management Team to assist him in pulling Nigeria out of its present economic woes.
The letter read: “We have conducted some analysis on the 2016 Budget estimates which Mr. President submitted to the National Assembly. We are concerned over the absence of equity in the allocation of particularly capital spending. The three geopolitical zones in the North are severally shortchanged.
“For a region deserving greater resources and attention, as well as the political backbone of your administration, this situation will pose serious problems for your administration.
“We advise Mr. President to review the proposed allocations in consultation with the National Assembly. We wish to draw Mr. President’s attention to the fact that over 75 per cent of all Federal Government public service employees are from the three geo-political zones in the South. This means that virtually the same percentage of recurrent spending will go to Nigerians from the South”.
They added, “we urge Mr. President to establish an Economic Management Team and conclude appointments of key officers and Advisers”.
“Where there are evident weaknesses and gaps in skills, competences, experience and integrity, we urge Mr. President to take steps to address them”, they said.
The NEF advised the president to make agriculture, water resources and the exploitation of the natural resources in the North as well as the rehabilitation of its infrastructure as priorities for the national budgets over the next three years.
On the issue of insecurity and the activities of Boko Haram, the Northern Elders said, “We advise that all avenues should be exploited to further cripple and isolate this insurgency as well as improving the quality of intelligence and integrity of the leadership of the Armed Forces. We advise Mr. President to look into allegations that Boko Haram still has a substantial presence in many areas near Maiduguri and in other towns and villages.
“Mr. President should also look into possible complicity of foreign nations in the fight against Boko Haram and take firmer steps to protect our nation’s security against subversion”, the group said.
On the increasing spate of kidnapping and cattle rustling, the forum appealed to the federal government to work towards major improvements in basic policing of the communities and investigate possible collusion of law enforcement agencies in these crimes.
It also asked the president to deal squarely with the threat posed by the pro-Biafra group, Indigenous Peoples of Biafra (IPOB), by isolating members of the group from the rest of the people of the South-East geo-political zone.
The Forum lamented the condition of the Internally Displaced Persons (IDPs) scattered across camps in different states and asked Mr. Buhari to galvanize the National Emergency Management Agency (NEMA) to manage the humanitarian crisis properly.
On the power situation, the NEF urged the President to scrutinize all policies including the reforms taken by the last administration in the sector.
“The Northern economy is heavily dependent on power, particular small users who provide the backbone of the informal sector and rural economy.
“Costs which are being raised have the potential to cripple the economy further, and the North will be worse hit, with virtually no viable industries growing its economy.
“People of the North recognize that substantial amount of work has to be undertaken by themselves particularly in the area of improving our assets in the banking and finance sector and in industrializing the North.
“We appeal to Mr. President to remain sympathetic to initiatives which channel funding and expertise to the North from the country as well as from international financing and other support sources”, they said.
On the ongoing war against corruption, the NEF commended the president for his resolve to fight corruption but urged him to address institutional weaknesses that make corruption thrive.
According to the Forum, President Buhari ought to broaden the scope of the impact of the anti-graft war so that the citizens would feel the impact of the economic policies of the administration.
The elders also asked Buhari to monitor the ongoing constitutional amendment process by the National Assembly closely and pay close attention to issues such as cost of governance, the war against corruption and improving democratic processes.