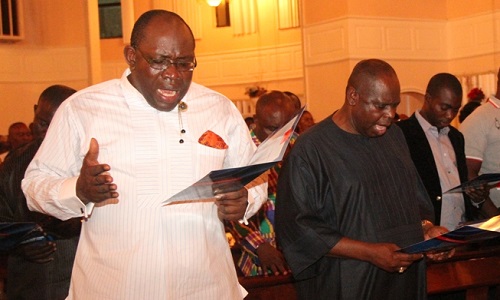 The Bayelsa State chapter of the All Progressive Congress (APC) yesterday described as laughable and a mockery, the decision by the State Governor, Seriake Dickson to name two structures in the state to immortalise the late first civilian governor of the state and acclaimed governor-general of Ijaw nation, Diepreye Solomon Peter Alamieyeseigha.
Governor Seriake Dickson had at a valedictory state executive council session in Government House on Friday, witnessed by former President Goodluck Jonathan, widow of the deceased, Dr (Mrs) Margaret Alamieyesigha and all past and present members of the state executive council from 1999 to date including past and present house of assembly members and traditional rulers, disclosed that the state government will rename the Government House Banquet Hall, Chief DSP Alamieyeseigha Memorial Banquet Hall and the road linking Yenagoa, the state capital to Alamieyeseigha’s home town Amassoma, as Chief DSP Alamieyesigha Road.
Gov. Dickson also said the State Government will build a symbolic mausoleum in honour of the late former governor at the Ijaw Hero’s Park in the state capital and also commission a group of scholars to document the life and times of the late Alamieyeseigha for the Ijaw history project.
But the APC said the decisions are a mockery to the great contribution of the late former Governor of the State.