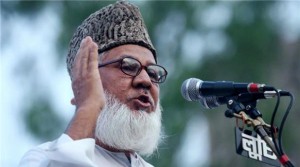 Bangladesh has executed head of the banned Jamaat-e-Islami party Motiur Rahman Nizami for war crimes committed during the 1971 war of independence to break away from Pakistan, the country’s the law minister said. Nizami was hanged at Dhaka Central jail at one minute past midnight local time on Wednesday after the Supreme Court rejected his final plea against a death sentence imposed by a special tribunal for genocide, rape and orchestrating the massacre of top intellectuals during the war.

In a sign of divided opinion over the hanging, scores of protesters came out in the streets of Dhaka to condemn the execution, while hundreds of others cheered the move. “We have waited for this day for a long 45 years,” said war veteran Akram Hossain. “Justice has finally been served.”

Thousands of extra police and border guards were deployed in the capital Dhaka and other major cities to tighten security as Jamaat-e-Islami called for a nationwide strike on Thursday in protest of the execution. Previous similar judgments and executions have triggered violence that killed around 200 people, mainly Jamaat activists and police.

Al Jazeera’s Tanvir Chowdhury, reporting from Dhaka, said calling for a nationwide shutdown was the usual reaction by Jamaat-e-Islami following an execution or death sentence against one of its members.

But, he added that protests were not likely to be that intense. “The party itself is very marginalised right now. Most of the members are either behind bars or on the run,” Chowdhury said. Nizami had been in prison since 2010.  The party denies that its leaders committed any atrocities. Calling Nizami a “martyr”, it said he was deprived of justice and made a victim of a political vendetta.