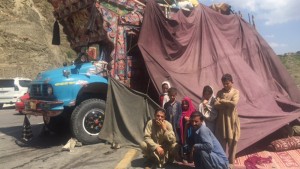 Tension at the Pakistan-Afghanistan border has escalated over the fencing of a 2km area at the Torkham crossing which was stopped by the Afghan forces. The border crossing has been closed for three days and Pakistani officials have insisted that it will remain shut until Afghanistan takes back its objection to the fencing.

Pakistan said there is infiltration of fighters from the Afghanistan side and fencing of the border was the only immediate solution to keep a check on the people crossing the border. Al Jazeera’s Kamal Hyder, reporting from the Pakistan side of the Torkham crossing, said there were thousands of lorries that have been stranded at the border for three days because of the closure.

“The drivers are facing hardships and are living in tough conditions by the roadside,” he said. “They are carrying supplies for the NATO forces in Afghanistan and there are perishable items including food and vegetables on the trucks.” Families waiting to cross the border into Afghanistan told Al Jazeera they wanted to go back to their homeland and start a new life after spending almost three decades as refugees in Pakistan.

The lorry drivers complained of being stranded on the roadside without food and water for three days and urged both governments to resolve the issues on an immediate basis.