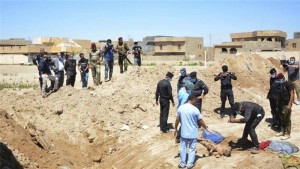 More than 50 mass graves have been discovered in territory formerly controlled by the Islamic State of Iraq and the Levant (ISIL) in Iraq, including three burial pits in a football field, the UN envoy has said. Jan Kubis, Special Representative of the UN Secretary-General for Iraq, told the Security Council on Friday that evidence of the “heinous crimes” committed by the group in Iraq were being uncovered as territory is retaken from ISIL.

“More than 50 mass graves have been discovered so far in several areas of Iraq,” he said. Iraqi forces, with backing from the US-led coalition that carries out daily air strikes against ISIL, also known as ISIS, have retaken significant ground in recent months.

In the city of Ramadi, three graves containing a total of up to 40 sets of remains were found in a football field on April 19, said Kubis.  Ramadi was retaken from ISIL when Iraqi forces seized the main government compound late last year, but the city was completely retaken only in February.

The envoy said that the humanitarian crisis was worsening in Iraq, with nearly a third of the population, or over 10 million people, now requiring urgent aid – double the number from last year.   He projected that a further two million people could be displaced by the end of the year by new military campaigns aimed at driving out ISIL.   Iraqi and Kurdish forces launched an offensive in March in the province of Nineveh, of which ISIL-controlled Mosul is the capital. ISIL have held Mosul since June 2014.