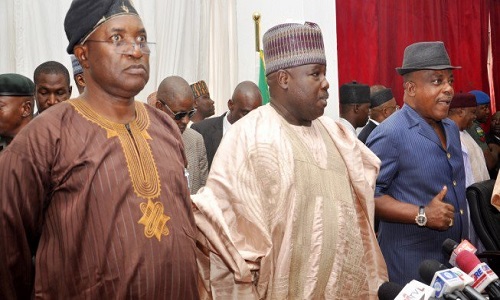 Senator Ali Modu Sheriff may be fighting a lost battle to retain his seat as national chairman of the Peoples Democratic Party (PDP) following the withdrawal of support of members of his own National Working Committee (NWC).
The NWC members yesterday unanimously agreed to recognize the Senator Ahmed Makarfi caretaker committee, which emerged at the national convention in Port Harcourt, Rivers State last weekend.
Mr. Sheriff, who stormed out of Port Harcourt in anger after his announcement canceling the convention did not stop the PDP from sacking him as national chairman, vowed to remain in office.
His decision to stay-put in office pitched him against the Makarfi-led caretaker committee, which enjoys the support of the powerful bloc of PDP governors, National Assembly members and other major organs of the party.
However, the tide changed against Mr. Sheriff on Wednesday as members of the NWC unanimously pledged their allegiance to the new caretaker committee.
A statement signed ‎by the outgoing national vice chairman of the party, Prince Uche Secondus; the deputy national secretary, Barrister Onwe Solomon Onwe; national legal adviser, Victor Kwon; national woman leader, Amb Kema Chikwe; national youth leader, Abdullahi Maibasira; national financial secretary, Bolaji Anani and national treasurer, Alhaji Buhari Bala, said as products of the party’s convention in Port Harcourt, they accepted all the decisions and resolutions reached.
“The national caretaker committee constituted by the national convention on May 21, 2016, is fully within the powers of the national convention under Section 33 (5) (e) of the party’s constitution.
“We recognise the Sen Ahmed Makarfi-led national caretaker committee of the PDP and offer the committee all our support and cooperation”, the statement said.