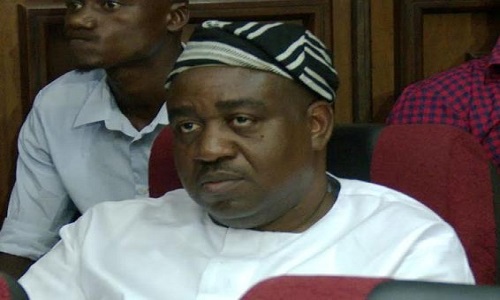 A prosecution witness for the Economic and Financial Crimes Commission, EFCC, Abubakar Umar, yesterday told the Federal High Court in Abuja that former governor of Benue State, Gabriel Suswam, instructed that N3.11bn be paid into his bank account.
Umar, a bureau de change operator, who was being led in evidence by EFCC’s counsel, Rotimi Jacobs (SAN), said the ex-governor used to bring foreign currencies for him to change in 2014.
“In August 2014, I was in my office when Suswam called me on a mobile phone with number 08180505050. My phone number that he called is 08062666661. He said I should come and meet him in his Maitama residence and I went to the house and he connected me with one woman. He told me to give her my account number that they would deposit money into my account”, Umar said.
The witness said N413 million was first deposited into his account for the purpose of exchanging it into dollars on behalf of Suswam.
“In August 2014, Suswam asked me to change the money into dollars and bring it to Government House and that was not the only money that was sent to my account. Money was sent into my company’s account (Famfash Limited) six times; on Sept. 12, 2014, N633m was paid into my account, after two hours, N637m was paid”.
He further said that N1bn was paid into the account.
“On October 13, 2014, N630m was paid into my account, after one hour, N8.16m was transferred into my account. In October 17, 2014, N1.68bn was paid into my account and all the lodgments were made on the directive that I should convert the money into dollars for Suswam. The total sum of the monies was N3.111 billion”, he said. (NAN)