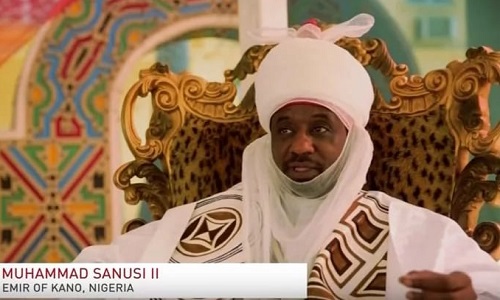 The Emir of Kano, Alhaji Muhammadu Sanusi II, has given an insight into how powerful the former Minister of Petroleum Resources, Mrs. Diezani Alison-Madueke was during the administration of President Goodluck Jonathan, saying nobody ever had a confrontation with her and survived such effrontery.
This, Sanusi, who was a former Governor of the Central Bank of Nigeria, CBN, said was because Alison-Madueke was one of the most influential ministers under Jonathan.
He said, “I knew that taking on the Nigerian National Petroleum Corporation was taking on the most powerful minister in Jonathan’s government, and nobody who had touched Diezani had survived. It was not a question of what would happen, I just didn’t care at that time. I did not want to go down in history as having seen this and kept quiet.
“After the first round of reconciliation, there was $29bn that was explained. And how was that explained? Crude that was shipped by NNPC did not entirely belong to NNPC”.
He said some oil companies paid taxes and royalties in oil, and the NNPC sold this oil on behalf of FIRS, meaning FIRS got the money and not necessarily the federal government.
“No reasonable explanation for $20bn, $6bn was with NPDC that had not gotten to the federation account till date”, the Emir said.
Sanusi also said that the former president threatened him for writing a letter when he was CBN Governor, to inform him (Jonathan) that $49bn was missing from the account of the NNPC.
According to him, the former president said that he (Jonathan) would rather resign than for the CBN Governor, which was Sanusi, to remain at the head of the apex bank.
The former CBN governor said when he wrote the letter to Jonathan in August 2013, the ex-president did nothing about it not until another former President, Chief Olusegun Obasanjo, made reference to it four months later in a scathing letter to him (Jonathan) that he got angry and decided to take action.
He said unfortunately, the ex-president was more concerned with the fact that the letter leaked rather than sanction the people under whose watch the money allegedly went missing.
He said, “In the middle of all these, the President called me and said I should see him at 3pm. I turned up at 3pm and the entire place had been swept. There was no one apart from security services. I got to his office, it was just me and him. It was as if everybody had been asked to go.
“And so he says to me, he’s calling me because he is surprised that the letter I wrote to him got to Obasanjo, I said I’m surprised too. He said he was convinced that the letter went from the CBN to Obasanjo, and I had 24 hours to find who leaked the letter or sack somebody; the director who prepared the letter or my secretary and if I did not sack them, it was proof that I leaked the letter and therefore, I should resign.
“I said to him that I’m surprised that I’m being asked to resign for raising an alarm over missing funds and the minister in charge of the portfolio is not being asked to resign.
“From then I knew I had signed my equivalent of a death warrant. But I said I was not resigning. He got very angry and said whether you like it or not, you’re going to leave that office, I cannot continue to work with you, either you or I will leave government”.
Emir Sanusi, however, revealed that immediate past Governor of Rivers State, Rotimi Amaechi, had confessed to leaking the letter.
The former CBN governor also traced the current economic crisis in the country to the stealing and lack of accountability that characterized the Jonathan administration.
Sanusi said he had warned the former president that there would be inflation, unemployment and currency instability if leakages were jot plugged but sadly, nothing was done about it.