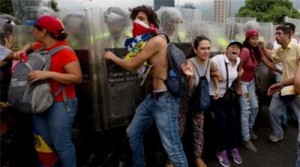 Riot police have fired tear gas at stone-throwing protesters in Venezuela’s capital amid opposition demonstrations to pressure electoral authorities into allowing a recall referendum against President Nicolas Maduro. Protesters and National Guard members clashed on a highway in Caracas on Wednesday where thousands of demonstrators chanted “freedom” and waved copies of the constitution.

A video showed an officer appearing to use pepper spray against Henrique Capriles, the two-time presidential candidate, during the protest.  Capriles later said on Twitter that he was fine. In the western opposition stronghold of Tachira, protesters brandished signs reading “We don’t want to do die of hunger”, while some masked youths blocked streets with rubbish and prepared Molotov cocktails. The Democratic Unity coalition has stepped up its campaign to topple Maduro amid a worsening economic crisis, but says the government-leaning electoral body is intentionally delaying the verification of signatures in favour of the referendum.

But if a successful recall referendum is held next year, the presidency would fall to the vice president, a post currently held by Aristobulo Isturiz, a loyalist of the governing United Socialist Party. The opposition says Maduro, elected in 2013, is pushing the oil-producing country towards economic catastrophe. One recent opinion poll showed that almost 70 percent of Venezuelans want Maduro stripped of presidency this year.