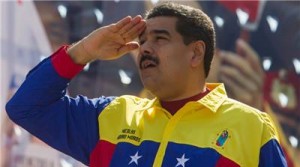 Thousands of workers in Venezuela will receive a pay rise of 30 percent as the country’s socialist government works towards improving its deteriorating economy. Sunday’s introduction of the minimum wage is aimed at calming tensions caused by runaway inflation and food shortages.

Nicolas Maduro’s government has been rocked by protests in response to the crisis and demands from the country’s opposition to stand down. The embattled president spoke to Venezuelans in a televised address on Sunday evening.  The government, which models itself on the leftwing ideology of its late leader Hugo Chavez, still has significant support among the country’s poor.

However, even the most dedicated supporters are feeling the pinch these days. Many have turned to government-sponsored, self-sustaining programmes to deal with the shortages. Naudy Aliendref, a supporter of the government who helps out at a community-run allotment to grow the essentials, is confident Chavez’s ideology can weather the storm.

“I don’t get paid to do this. It’s an honour for me to teach what I’ve learned thanks to President Chavez,” he said “The knowledge I’ve gained has to be socialised … for me Chavismo is like a brotherhood.” Bartulo Rodriguez, Aliendref’s neighbour, told Al Jazeera that Venezuela’s poorest were still appreciative of the government’s efforts. “People want to keep hoping things can be better, they are afraid to lose their benefits,” she said. “And the government is trying to maintain the policies that assist the poor but the economy has fallen too low.”