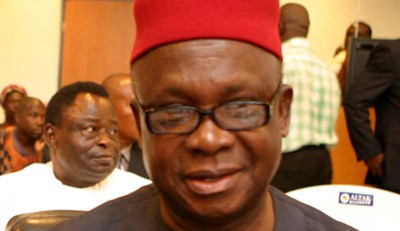 The immediate past governor of Ebonyi State, Martin Elechi, has rejected a Toyota V8 SUV gift from his successor, David Umahi.

The State Government had based on the approval of the State House of Assembly, purchased four Sport Utility Vehicles for former governors of the state at the cost of N29million per unit.

Mr. Elechi and his predecessor, Sam Egwu alongside current Minister of Science and Technology and former governor of old Abia State, which Ebonyi was carved out from, Ogbonnaya Onu were to receive one vehicle each while a former Senate President and immediate past Secretary to the Government of the Federation, Pius Anyim, was to receive the remaining one.

In a letter to the beneficiaries, the State Government said the largesse was “in recognition of their role in promotion of democracy in Ebonyi State and for meritorious services in that regard”.

In a letter rejecting the gift, Mr. Elechi, who had a fall out with Umahi, his former deputy in the build-up to the 2015 general elections, said he found it hard to convince himself that he fitted into the category of those his successor wished to honour.

He also argued that his role in the promotion and sustenance of democracy was the antithesis of what was being practiced in the state today under the Umahi administration.

The former governor also wondered why the same government, which had refused to pay his entitlements and severance package, would cough out enough money to purchase such exorbitant car for him.

“Let me remind you that for the past twelve (12) months, I have not been paid my salaries and second term severance allowance. These are my entitlements under the law of Ebonyi State; they are not a favour”, said Mr. Elechi.

“But of what use is this practice of sending seasonal gifts to a man who is being hounded and denied of his lawful official entitlements?”

The ex-governor also lampooned his successor for the campaign of calumny launched against him and his tenure in office.

He said, “I have no doubt that I made an impressive impact in Ebonyi State in manpower development with institutional reforms, attitudinal change philosophy, and infrastructural development.

“Your Excellency will also recall that when I brought you on board in 2011 as my Deputy, we made you the Chairman of the Executive Council Committee on Inspection. You never criticized or condemned the need, quality, or pricing of any project.

“But with your assumption of office on 29th May, 2015, every one of my projects had become a subject of public ridicule, outrage and outright condemnation. The only exception is probably the ultra-modern digital radio and television complex which I conceived of and completed from scratch to finish”.

“It is not condemned or criticized because it is an organ by which I am regularly vilified and rubbished. The permanent secretaries I appointed and/or trained have been swept out of office for no known reason. Ebonyi State is today the only state being governed without permanent secretaries”.

Mr. Elechi further criticized the largesse, likening it to a Greek gift as the state governor, who signed off on the donation, was also the one behind him and his sons’ travails in the hands of the Economic and Financial Crimes Commission (EFCC).

“Why have I chosen to go down memory lane even though the issues raised above are only a tip of the iceberg? With so much calumny, character defamation and outpouring of invectives and unabated fresh petitions swelling up to the anti-graft agency on weekly basis, why am I considered worthy to receive a State’s honour? Where and what are those ‘Meritorious services’ that justify my consideration for a gift of car, when I am being hounded day and night with my children? Is this not the height of contradictions?

“As if the bad verdict on projects is not enough, there is the saga of malicious and false petitions against me and two of my children to the Economic and Financial Crimes Commission (EFCC)… This is courtesy of Your Excellency’s ingenuity with your team players”.

Meanwhile, a group, The Save Ebonyi Network, has condemned the gift of cars to the former governors of the state by the Umahi administration.

The group, in a statement jointly signed by its National Coordinator, Okorie Nnamdi, and Secretary, Mbam Ofoke, described the largesse as a waste of public funds especially in view of the present economic realities in the country.

The group wondered why the beneficiaries, who in every sense could afford the cars on their own, would be given the cars at a time when the state government was busy cutting salaries of health workers in the state.

“The situation today in the state is that of gloom and despair as many children of civil servants have dropped out of school as the drastic reduction in their salaries has made it difficult for them to pay their children’s school fees yet the Umahi administration has millions of naira to buy cars for people who have no need for them”, the statement said.