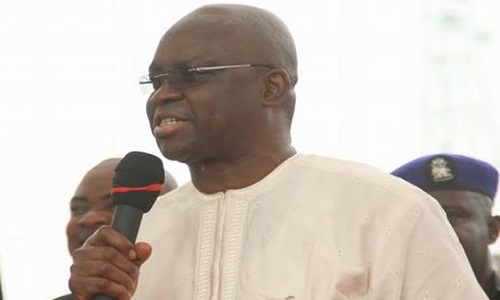 The Special Assistant on Public Communications and New Media to Governor Ayo Fayose of Ekiti State, Mr. Lere Olayinka, has blasted the immediate past Commissioner for Finance in the state, Dapo Kolawole, for saying the state government could afford to pay workers three months’ salary out of five months salary arrears and several months pension.
Mr. Kolawole, who was finance commissioner in the state between 2010 and 2014, was reacting to the indefinite strike embarked upon by the State chapter of the Nigeria Labour Congress, NLC, Trade Union Congress, TUC, and Joint Negotiating Council, JNC.
The former commissioner, who spoke with reporters in Abuja on Tuesday, cited “gross incompetence” and “lack of capacity” on the part of Governor Fayose for the lingering economic crisis in the state.
In his response to Kolawole on Thursday, Olayinka said the comment was a “feeble attempt to cover up the mismanagement of the State finances under the All Progressives Congress (APC) government of Dr Kayode Fayemi”.
“It is only in the world of miracle that a State that was plunged into debt and is losing over N1 billion to loan deductions monthly can sustain regular payment of salaries”, the governor’s media aide said.
According to Mr. Olayinka, the APC government of Mr. Fayemi received N46.4 billion from the Excess Crude Account, yet took a N25 billion bond and N31 billion commercial bank loan.
“In saner climes, the likes of Dapo Kolawole will be covering their faces in shame, having presided over the unprecedented looting of Ekiti State treasury and plunging of the State into unwarranted debt”, he said.
“The reality is if Ekiti was not plunged into debt by the Fayemi’s government, the State would have received N1, 920,027,383.96 for the month of April, 2016; N1, 860,919,359.32 in May, 2016; N2, 151,966,892.79 in March, 2016; N2, 324,677,903.78 in February, 2016; N2, 546,181,882.96 in January, 2016 and N2, 258,837,558.38 in December, 2015!
“Therefore, a man like Dapo Kolawole, who as Finance Commissioner ran the State economy aground should just cover his face in shame instead of running from one media house to another to justify the use of borrowed funds to plant flowers, construct uncompleted State Pavilion, Civic Centre, Governor’s Lodge among others irrelevant projects”, Mr. Olayinka said.
He further stated that under the former finance commissioner’s watch, the sum of N852, 936,713.92 was illegally withdrawn from the State Universal Education Board (SUBEB) account, making the Universal Basic Education Commission (UBEC) to suspend Ekiti State from accessing any further FGN-UBE Intervention Fund.
“Above are just two aspects of the financial mismanagement superintended over by Dapo Kolawole and common sense demands that characters like him should just keep mum while the Government of Ayodele Fayose goes about finding solutions to the financial crises caused by the frivolous loans obtained by the Fayemi-led APC government”, he said.