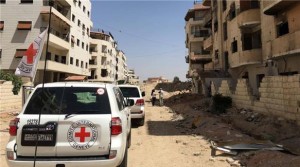 A convoy of trucks carrying food arrived in Daraya late on Thursday, delivering rice, lentils, sugar, oil and wheat flour to civilians for the first time since the government laid siege to the town in late 2012. Assad’s forces bombarded the town shortly after the delivery, according to a witness and human rights monitors, dropping barrel bombs from helicopters as residents shared food.

Shadi Matar, a local council member, said aid had not yet been distributed “because of the intensity of the raids”.  Jean-Marc Ayrault, France’s foreign minister, accused Syria of “extraordinary duplicity” over the bombings, which came just as aid workers were beginning to distribute supplies to thousands of desperate people. Ayrault said he was “outraged beyond words”, declaring the end of an already shaky ceasefire and calling for world powers to meet.

Mark Toner, US state department spokesman, said “such attacks are unacceptable in any circumstance, but in this case they also hampered the delivery and distribution of badly needed assistance”. Matthew Rycroft, the UK’s ambassador to the UN, described the bombing as “atrocious”. “The international community is united around the obligations of the Assad regime,” he said.