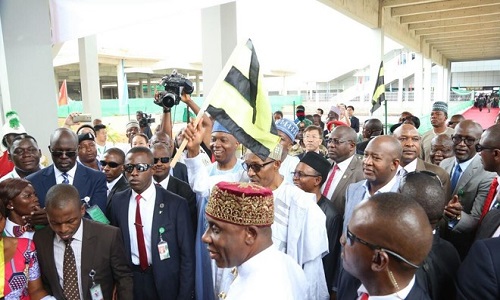 The commissioning signals the commercialization of the train services after weeks of test run during which passengers and goods were transported free of charge.

The billion dollar modern rail project started by the Goodluck Jonathan administration, reached an advanced stage before the end of that government and was completed by the Buhari administration.

Speaking at the train’s main station at Idu, Abuja, President Buhari said the federal government would link all states and commercial centres in the country with rail lines.

He later took a train ride from Idu to Kubwa, a suburb of Abuja.

The Senate President, Dr. Bukola Saraki; Speaker of the House of Representatives, Yakubu Dogara; Chief Justice of the Federation, Justice Mahmud Mohammed; Minister of Transportation, Rotimi Amaechi, Governor Nasir El-Rufai of Kaduna State, Minister of the FCT, Muhammad Bello and Minister of State for Transportation (Aviation), Senator Hadi Sirika were among dignitaries that witnessed the flag-off of commercial operations on the Abuja-Kaduna rail line.