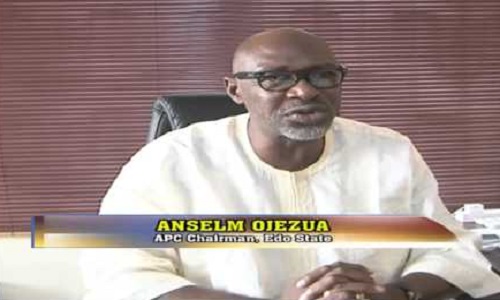 The All Progressive Congress (APC) in Edo State has denied rumours making the rounds that the name of Hon. Philip Shaibu has been submitted to the national leadership of the party for onward transmission to the Independent National Electoral Commission, INEC, as the APC deputy governorship candidate.

The governorship election in Edo has been slated for September 10 with the APC candidate, Godwin Obaseki, set to contest against Pastor Osagie Ize-Iyamu of the Peoples Democratic Party, PDP.

Shaibu, who campaigned for the emergence of Obaseki as the APC governorship candidate, is the member representing Estako Constituency in the House of Representatives. He is also the former Majority Leader of the state House of Assembly.

Reacting to reports that Shaibu has been nominated as running mate to Obaseki, the Edo APC denied it, only describing the speculation as “interesting”.

Leaders of the APC from Edo North and Edo Central are fighting over the slot.

Speaking in Benin City, the state capital on Sunday, the Edo APC Chairman, Anselm Ojezua, explained that the deputy governorship candidate could emerge from any zone, adding that this can only be decided after a meeting of the stakeholders.

On reports that he was being asked to resign for Edo Central to produce the deputy governorship candidate, Ojezua stated that the nomination of a running mate has nothing to do with his office.

“How does it have to do with anything? It does not affect my position. We have not picked any name”, he maintained.