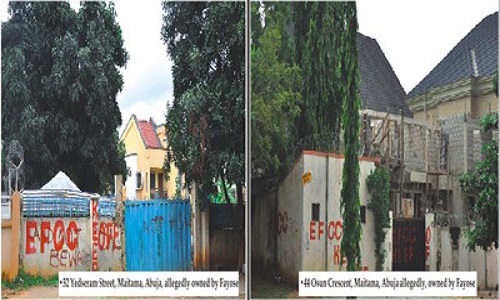 The duplexes, estimated at N1.350billion, include four in Lagos and two in Abuja.

The properties were allegedly acquired for the governor by his associate, Abiodun Agbele and sister, Mrs. Moji Ladeji.

This is just as Mrs. Ladeji has approached the Federal High Court, Ado-Ekiti, laying claim to one of the Abuja duplexes.

According to credible sources, the anti-graft agency believes that the properties were bought with public funds including the N1.219billion slush fund from the Office of the National Security Adviser (ONSA) handed over to Fayose by former Minister of Defence, Mr. Musiliu Obanikoro, and kick-back from contractors.

Part of the slush funds came from the N4.745billion which was paid into Obanikoro’s company, Sylva Mcnamara by the ONSA for the 2014 governorship poll in the state.

The properties located and marked by operatives of the EFCC are 44, Osun Crescent and 32, Yedseram Street in Maitama, Abuja; and houses 3, 4, 6, and 9 in Plot 100, Tiamiyu Savage Street, Victoria Island, Lagos.

EFCC sources said the funds were wired to pay for the duplexes.

While the duplex on Osun Crescent was allegedly bought for N200million from Skye Bank Plc, the one located in Yedseram Street was purchased for N270million from a businessman, Rabi Kundili.

All the houses in Lagos were paid for by Agbele, the detained associate of the governor, who is currently under investigation.

Agbele allegedly paid over N880 million for the Lagos properties.

Sources said the duplexes were “acquired within 180 days in office by Fayose” using De-Privateer Limited, a company owned by Agbele.

The EFCC seized the properties on the strength of the provisions of sections 28 and 34 of the EFCC (Establishment Act) 2004 and Section 13(1) of the Federal High Court Act, 2004 which empowers the anti-graft agency to invoke Interim Assets Forfeiture Clause.

“Section 28 of the EFCC Act reads: ‘Where a person is arrested for an offence under this Act, the Commission shall immediately trace and attach all the assets and properties of the person acquired as a result of such economic or financial crime and shall thereafter cause to be obtained an interim attachment order from the Court’.

Section 13 of the Federal High Court Act reads in part: “The Court may grant an injunction or appoint a receiver by an interlocutory order in all cases in which it appears to the Court to be just or convenient so to do.

(2) “Any such order may be made either unconditionally or on such terms and conditions as the Court thinks just”.