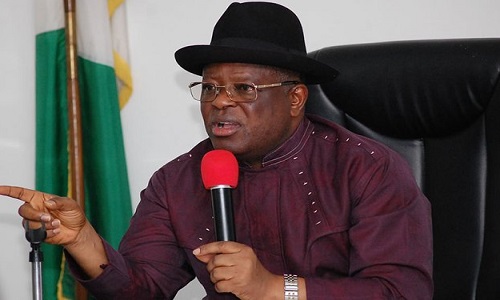 The Ebonyi State Governor. David Umahi has denied cloned social media accounts registered with his name and pictures as scam being used to defraud unsuspecting members of the public.

The governor in a statement yesterday made available by his Chief Press Secretary, Mr. Emma Anya, advised the public to disregard such accounts on Facebook, Twitter and other social media platforms.

The statement reads, “The attention of Engr. David Umahi, the governor of Ebonyi State has been drawn to the existence of accounts on Facebook, Twitter, etc operated by unscrupulous individuals asking unsuspecting people to apply for jobs and contracts on the social media by paying for forms. One of such accounts on Facebook asks people to pay to one Dr. James with mobile telephone number 0813 939 3872.

“Governor Umahi does not directly or indirectly operate accounts on Facebook, Twitter and other social platforms. When he decides to, the public would be informed accordingly. He will never ask anyone to pay for jobs or contracts as being demanded by the impersonators.”

“The general public is therefore advised to dishonour such demands. People should be extremely careful with those they transact business with on the social media, especially those claiming to be public office holders. Ebonyi State Government publishes contracts, job vacancies and other activities in Newspapers and not on Social media platforms,” the statement added.