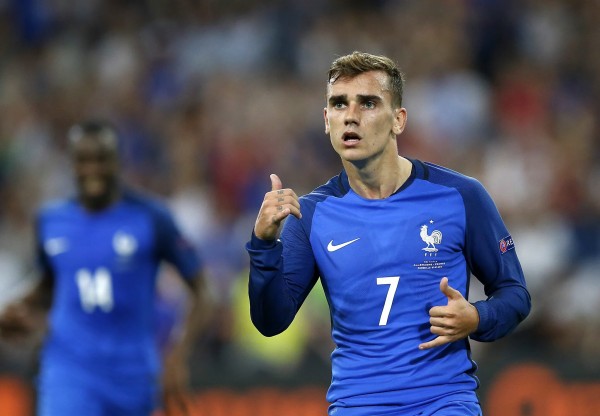 Host nation France will have to build a statue in Griezmann’s honor if they manage to win the Euro 2016.

Save for their 5-2 mauling of an average Iceland team, one had a foreboding that the Les Blues couldn’t go all the way.

When an average team gets drawn against the German machines, it would take the hardest of hearts to predict a French victory.

However, Germany had Khedira out and decided to go with Schweinsteiger  who has all the pace of a turtle and Emre Can who honestly should never start a match you intend to win.

Toni Kroos was played slightly upfront as Thomas Muhller was played as a lone striker. It proved to be a recipe for disaster as Germany found themselves overrun in the midfield- Toni Kroos was atrocious throughout.

France showed early signs of life as the usually efficient Germans were left asking for answers.

As though to show how inept the midfield was, Bastian Schweinstegger conceded a penalty just on the stroke of half time.

Griezmann was the epitome of confidence as he stepped up and tucked it away, its not often one beats Manuel Neuer.

France came into the second half with defensive will and looked to hit the Germans on the counter. What made this tactic all the more effective was how woeful the German midfield was.

Was Thomas Muhller even present?

Eventually, Griezmann found the opportunity to score a brace and it was the summary of the evening for the Germans.

It was a new low for Joachim Low.