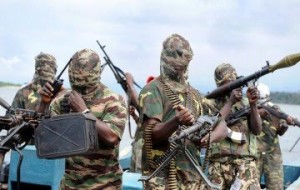 The Movement for the Emancipation of the Niger Delta (MEND) has claimed in a statement released today that a team negotiating on behalf of the Federal Government had agreed to release several people detained or imprisoned.

The statement disclosed that Mr. Kanu and other detained IPOB activists would be released on condition that they renounce their agitation for secession.

According to MEND, Adolphus Wabara, an ex-senator had introduced the compromise to secure the release of the pro-Biafran agitators.

”One of the most immediate and urgent fall-outs of the ongoing dialogue is the imperative for the Federal Government and MEND to jointly and separately take proactive steps to rescue and secure the region in the event that the recalcitrant Niger Delta Avengers (NDA) continue on their senseless and politically-motivated path of attacks on the country’s oil assets.

“While ‘Operation Crocodile Tears’ is aimed at ensuring the combat readiness of the Nigerian Army in Amphibious and Internal Security Operations in the Niger Delta as well as check
criminal activities like kidnapping, pipeline vandalism, piracy and other forms of criminal activities spearheaded by the NDA in the region, MEND’s ‘Operation Moses’ is essentially to inform, educate and generally sensitize the citizenry in the Niger Delta, particularly the Government, the youth, oil companies, elders and militant community on the need to ceasefire and support the President Muhammadu Buhari Administration in its determined bid to proffer sustainable solutions to the current Niger Delta crisis.”

MEND urged all states, local governments, oil and gas companies and the people of the Niger Delta region “to go about their lawful and legitimate concerns without any iota of fear as we have received FIRM ASSURANCES from the Federal Government that ‘Operation Crocodile Tears’ is an innocuous exercise in the national interest.”

“’Operation Moses’ shall commence with a visit by the distinguished members of the AARON TEAM 2 to President Muhammadu Buhari at the State House, Abuja between August 22, 2016 and August 26, 2016.

“Thereafter, the Team shall hold sessions with top executives of major indigenous and international oil & gas companies operating in Nigeria, including the state oil company, Nigerian National Petroleum Corporation (NNPC) on August 29 and 30, 2016 in Abuja. The focus of those sessions shall include, to wit: Local content development; Petroleum Industry Bill; Corporate Social Responsibility/Host community relations, etc.

“On September 5 and 6, 2016 in Abuja the MEND Aaron Team shall hold sessions with the top echelon of security agencies in Nigeria as well as the top management of the intervention agencies in the Niger Delta, namely: Ministry of Niger Delta; Niger Delta Development Commission (NDDC) and the Presidential Amnesty Office. The Minister of Justice/Attorney General of the Federation is expected to personally attend these sessions. The focus of the sessions shall include: Extension of presidential amnesty to certain categories of political prisoners in Nigeria; Fundamental Human Rights; NDDC Act in focus; Presidential Amnesty Proclamation 2009 in focus; collapse of federal infrastructure in the Niger Delta in focus; Calabar-Lagos rail line in focus; East/West Road in focus, etc.

“The central clearing house for all activities connected with “Operation Moses” shall be the MEND Aaron Team 2 secretariat. Accordingly, the Secretary of the Team, Timipa Jenkins Okponipere, Esq., shall duly communicate with all concerned persons and institutions.

“Ultimately, peace and development in the Niger Delta region is the final destination of the ongoing dialogue between MEND and the Federal Government.”