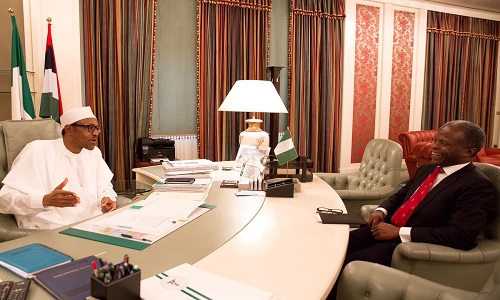 Vice President Yemi Osinbajo has debunked speculations in some quarters that the fight against corruption under the current administration is one-sided.

The vice president, was quoted in a statement issued on Tuesday night by his Senior Special Assistant on Media and Publicity, Laolu Akande, as debunking the speculation while speaking with journalists at the end of the 27th Ordinary session of the African Union (AU) in Kigali, Rwanda.

According to Osinbajo, corruption in the country is being looked at from all possible facets.

He said: “I think it’s entirely absurd, I think that view is absurd and without foundation or basis whatsoever. We look at corruption from all possible facets.

“If you look at for example, corruption on the military, from military procurement, obviously the only individuals responsible for that could be persons who had held office within the period in question and that has been done and clearly the opposition was not in the office at that time.

“Those who were in the office were not necessarily opposition individuals. These were Service Chiefs and other personnel who had served for a while.

“The other issues for example is the fraud and the corruption that is associated with large sums of money given out by the past National Security Adviser which went to several political figures and again these were large huge sums of money, over 2 billion US Dollars and the sheet size and the enormity of what we are talking about, must not be diminished in anyway or trivialised in anyway by any suggestion that it is partisan. How? In what way?” he queried.

The vice president stressed that those who made the suggestion that the anti-corruption fight is one-sided only want to trivialise a very important programme of the government.

The allegation, he added, is aimed at working against the strong effort of the government to recover huge sums of money that have been stolen from Nigeria.