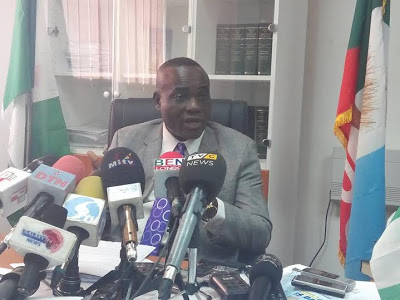 The Presidency has apologised to the Senate over the comment of the Representative of the Attorney General of the Federation at a meeting with the Committee on Judiciary, Human Rights and Legal Matters.

Sen. Ita Enang, Senior Special Assistant to the President on Legislative Matters (Senate), tendered the apology while fielding questions from journalists in Abuja on Friday.

Enang said that it was wrong for the Attorney General’s representative Mr Okoi Obono-Obla to have said that the Senate had no right to have invited the attorney General, Abubakar Malami.

“I heard the statements after and I want to apologise to the Distinguished Senate, to the Committee on Judiciary and to the distinguished senators.

“That statement ought not to have been made: the Attorney General is Attorney General of the Federation, appointed by Mr President, cleared by the Senate and responsible for the federation.

“We are going into this matter, we will handle this matter but I first have to tender my unreserved apology for the impression it may have created to the distinguished Senate, senators and the committee members”.

It would be recalled that the Senate had on Tuesday summoned Malami to appear before its Committee on Judiciary, Human Rights and Legal Matters to explain why he charged to court Senate President Bukola Saraki and Deputy Senate President Ike Ekweremadu for alleged forgery.

The AGF was represented by the Special Assistant to the President on Prosecution attached to the Federal Ministry of Justice, Mr. Okoi Obono-Obla.

However, Malami, who did not honour the invitation, said the Senate committee lacked the power to summon him, Obono-Obla said.

The committee then walked Obono-Obla out of the chamber saying; “Our invitation is for the AGF and not you. So, we cannot listen to you. We will report back to the plenary for us to take decision on this”.

Obono-Obla, who spoke to journalists while leaving the Senate chamber, said the alleged forgery suit against Saraki and Ekweremadu, is not an internal affair of the senate.

Obla in his interview said that “the senate had no right to invite the AGF” and that “the AGF was not answerable to the Senate”.

However, the SSA to President Buhari reiterated the apology to the Senate adding that the Attorney General was unavoidably absent.

“The Attorney General spoke with me yesterday on the matter in the morning that he is on official assignment on behalf of the country.