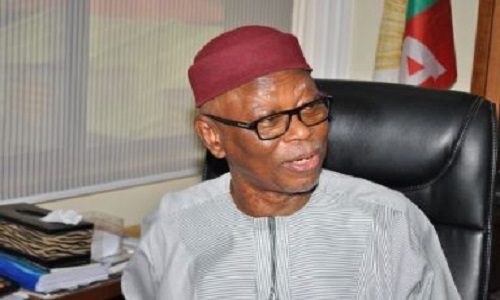 The National Chairman of the All Progressives Congress (APC), Chief John Odigie-Oyegun, has opened the party’s doors to all Nigerians interested in the development of the country.

Mr. Oyegun made the declaration on Wednesday in Benin, the Edo State capital when he received some members of Peoples Democratic Party (PDP) in Oredo Local Government Area of Edo, who defected to the APC.

He said the party was committed to turning things around in the country and would welcome any one genuinely aspiring to move the nation forward.

The APC national chairman said the party had made tremendous impact in Edo, adding that all those genuinely interested in the progress of the state, should ensure APC’s victory in the Sept. 10 election.

“Massive development has already started in the state and we welcome people who have the interest of the state and are progressive minded, to join and continue with this development”, he said.

In his remarks, Gov. Adams Oshiomhole said the defection of Dennis Evbuomwan, and other PDP leaders in Oredo, marked the end of the PDP in the state.

“To me, the coming of Evbuomwan and other leaders of the PDP in Oredo along with their unit leaders means they are here with a complete story.

“The unit heads are the real people on the field”, Oshiomhole said.

Earlier, Evbuomwan said their decision to join APC was based on “the historic developmental strides going on in the state”.

He described the PDP as a sinking ship, saying “when the ship is sinking, you don’t need to sink with it.

“I believe in the cause the APC is fighting, which is for the progress of the state, and I want to be part of that fight”.

Ebima Ogbeide, another leader in the area who defected to the APC, said the occasion marked a home coming for him.

“It is public knowledge that I resigned from the PDP three weeks ago, I am happy to be back home”, Mr. Ogbeide said.

He appealed for quick integration of those that decamped, to enable them canvass support for the APC governorship candidate, Godwin Obaseki.

On his part, the state chairman of the APC, Anselm Ojezua, said those that decamped were no strangers and promised to integrate them fully, so that they would contribute to APC’s success during the governorship election.

“The backbone of the PDP has been broken today. The PDP is dead in Edo”, Mr. Ojezua asserted.