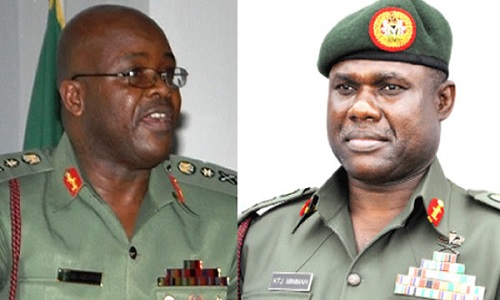 An investigation by the Presidential Committee on Audit of Defence Equipment Procurement from 2007 to 2015 (CADEP) has traced about N2billion, meant for the purchase of vehicles for the Nigerian Army, to the accounts of five children of a former Chief of Army Staff.

The accounts, as at the time of publishing this report, have been restricted.

The outcome of the panel’s investigation strongly pointed to the former Army Chief’s children using two companies to defraud the nation.

The panel said: “The committee reviewed the procurement carried out by Chok Ventures Ltd and Integrated Equipment Services Ltd, two companies that shared the same registered office, had one name as common controlling shareholder and sole or mandatory signatory to the various banks accounts of the companies.

“The committee further established that between March 2011 and December 2013, the two companies exclusively procured various types of Toyota and Mitsubishi vehicles worth over N2, 000,000,000.00 for the Nigerian Army without any competitive bidding.

“Most of the contracts awarded to the companies were also split, awarded on the same date or within a short space of time at costs and mobilization higher than the prescribed thresholds.

“For instance, on February 13 and 15, the two companies were awarded contracts worth N260, 000.000.00 and N315, 000,000.00 respectively for supplies of various vehicles. The Nigerian Army could not justify the exclusive selection of these vendors against other renowned distributors of same brands of vehicles procured.

“More seriously, the committee found no credible evidence of delivery of the vehicles by the two companies as there were no receipt vouchers, but only unauthenticated delivery notes, invoices and waybills that were purportedly used for the deliveries.

“Nevertheless, the vendors were fully paid based on job completion certificate authenticated by the then Chief of Logistics, Maj Gen D.D. Kitchener (rtd). The payments were also made without deduction of Withholding Tax (WHT). Furthermore, analyses of the various bank accounts of the two companies showed transfers to individuals, some of who are believed to be children of the army chief.

“Thus, the committee recommends further investigation to determine delivery of the vehicles and relationship of funds beneficiaries with the former COAS and the two companies. Furthermore, the panel said that Lt Gen O. A. Ihejirika (rtd), Maj Gen D. D. Kitchener (rtd), Col A. M. Inuwa and Mr Chinedu Onyekwere should be held accountable for the issues arising out of the contracts”.