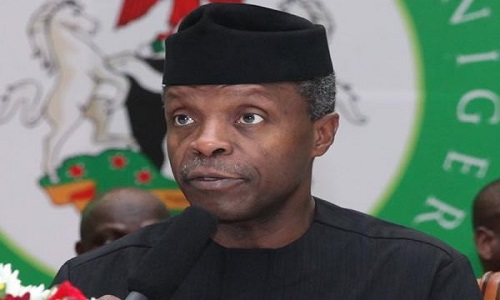 Vice President Yemi Osibanjo, SAN, has said the President Muhammadu Buhari-led administration is helping to relay the foundation of a new Nigeria, after years of neglect and mismanagement.

Osibanjo stated this at the ongoing 41st Annual National Conference of the Nigeria Christian Graduate Fellowship (NCGF) held in Benin, the Edo State capital with the theme: “Let Us Rise Up And Build”.

Represented by the Aso Rock Villa Chaplain, Rev. Sheyi Malomo, the vice president, who took a text from the book of Nehemiah 2:18, said “On assumption of office last year, this administration inherited a badly managed economy with a high level insecurity; we decided from the beginning that we will tackle the challenges without fear.

“By the grace of God the Buhari’s administration is relaying the foundation of a new Nigeria to the Glory of God”.

According to Malomo, “We will ensure that there is restoration of all the years the locust have eaten” adding, “The government has introduced a major fiscal measures on hard earn income, first, among which is the full implementation of the Treasury Single Account, (TSA) which has helped to remove over 40,000 ghost workers from the MDAs which is a huge plus to the Nation”.

He, however, stressed that it will require patience for the Buhari administration’s policies on infrastructures to begin to manifest.

The President of the NCGF, Dr. Sam Initina, who earlier in his remarks said time has come for Christians to rise up to the occasion, said: “I thank God for steering the ship of the NCGF safely for the past three years of our tenure”.

Initina, however, thanked the administration of President Buhari and all the security forces in the country for recording huge success in the fight against the deadly Boko Haram insurgency adding, that: “God who has started this great work will see to the total annihilation of this terrorist group”.

He, however, kicked against the administration’s plan to establish grazing reserves across states of the federation.

“We oppose this plan which will allow these terrorists easy spread throughout the whole Federation where they will continue with their bestial behaviour of raping women, killing farmers, destroying their crops and forcefully taking over their land and houses”, the NCGF leader stated.