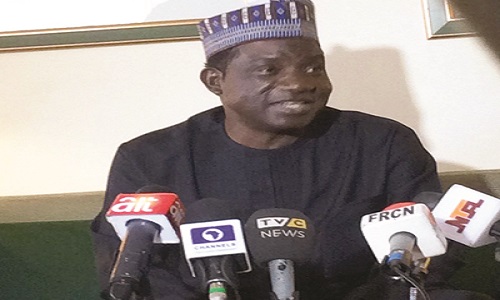 Governor of Plateau State, Mr. Simon Bako Lalong, has explained that the commission of inquiry on the state’s finances was not to witch hunt anyone but set straight the state’s debt profile.

A former governor of the state, Senator Jonah Jang, had in a statement issued Thursday by his media aide, Clinton Garuba, described his successor’s inauguration of the commission to probe his tenure between 2007 and 2015, as a wild goose chase.

While declaring readiness to give account of his tenure in office as governor, Sen. Jang urged that the commission’s inquisition should be without bias and free of pre-determined outcomes.

In apparent response to the concerns expressed by the former governor, Mr. Lalong said that he inherited a debt of N220billion, unpaid salaries and poor infrastructure, a claim Jang denies.

Speaking to State House correspondents after visiting Vice President Yemi Osinbajo at the Presidential Villa, Abuja on Friday, the Plateau governor said “There was no way that we could come and see what we saw on the plateau and still leave them without clarification”.

“The first one was that when I said that I inherited a debt of N220 billion, the former governor said ‘no’, that what I got was only N18 billion.

RELATED POST: Nothing Good Will Come Out Of Probing My Tenure, Says Ex-Gov. Jang

“I also spoke about projects and salaries that I inherited and he said ‘no’.

“But, what I did was first of all to concentrate on doing my best so that I will not lose focus; now we are able to pay our salaries in the state”, he said.

The governor disclosed that he cleared the salary arrears in order to make the citizens happy and to focus on development of the state.

“Now that the people are happy, I initiated the commission of enquiry because what I got from the transition committee was really alarming.

“For me to say that I will ignore it is going to be at the peril of my people”, he stated.

He said that the enquiry was to put the record straight so that the debt would not hunt his administration after office.

Governor Lalong also said that the judicial commission would compare what was inherited and what the past administration claimed it left and make clarifications.

According to him, after the clarification, the administration will send the report to the appropriate authority for prosecution.

He also denied that his state was confused about whether to have grazing reserve or ranches for cattle breeders.

He said that he was in support of ranching whereas there was a gazette from his predecessor on grazing reserve and route.

He said the gazette was only there to create confusion.

“I knew the advantage of ranching policy so I took my people on sensitization right from the youth to traditional rulers to religious leaders and we concluded with National Assembly members.

“And, all accepted that we should adopt the ranching policy.

“As far as Plateau state is concerned, we are into the ranching policy; if you see anybody talking about grazing reserve, it is not in my state”, he stated.