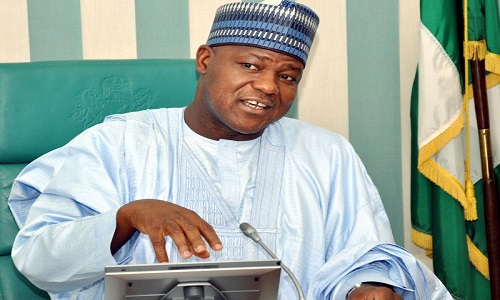 The embattled Speaker of the House of Representatives, Yakubu Dogara has vowed to remain in office, in spite of pressure on him to throw in the towel over allegations that he, alongside three other principal officers, padded the 2016 budget to the tune of N40billion.

The allegations were leveled against them by ousted chairman of the Appropriation Committee, Abdulmumin Jibrin.

The Speaker, who described his visit to Buhari as private, said he did not know anything like budget padding, challenging the journalists to ask his accuser for explanation.

Dogara said as a lawyer and experienced legislator, he had never heard of the word “padding” being an offence under any law.

Speaker Dogara, who feigned ignorance of the meaning of “padding” when journalists asked if the allegations raised by Jibrin formed part of his discussions with the president, said “I don’t know, educate me. I am a lawyer and the speaker, and I have never heard of the word ‘padding’, what does padding mean?”

He stated that based on law, he who alleges, must prove same even as he faulted calls for him to reconvene the House before its September resumption date and step aside to allow for unbiased and thorough investigations.

“We have rules and regulations. This is not a mock institution, we operate by rules and we will follow the rules”, he said.

When asked if he would heed calls to resign, Dogara said “Resign for what? For what?”

He continued: “What is padding? You haven’t told me, ask Jibrin what is padding. For me, I studied Law, and I have been in the legislature and all this period, I have never heard of the word padding being an offence under any law. If I don’t know, you are the media, research the law and let me know”.

He also asserted that he was not losing sleep over the allegations leveled against him or the threat to his seat as the number four citizen.

“Worried for what? Worried over nothing. Why should I be worried? As far as I am concerned, I am not worried over anything”, he stated.

In response to the question whether Jibrin will be sanctioned when the House resumes, Mr. Dogara said “I am not the chairman of ethics committee of the House, so, I wouldn’t know, and I don’t know what padding means”.