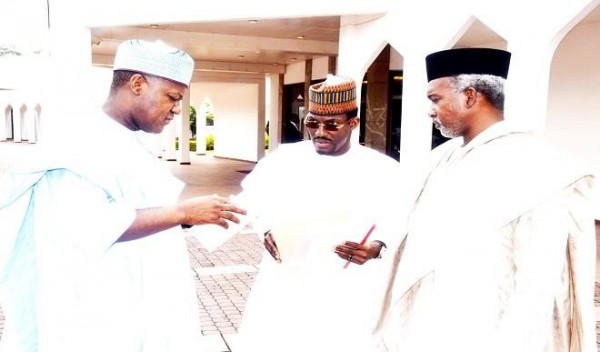 Some top political heavyweights from Bauchi State on Friday stormed the National Secretariat of the All Progressives Congress (APC) in Abuja, with accusations of alleged wrongdoings, including misuse of funds, against the state governor, Mohammed Abubakar.

Led by Speaker of House of Representatives, Yakubu Dogara, and the Minister of Education, Adamu Adamu, the politicians accused the governor of misusing the N8.6 billion bailout funds given to the state by the Federal Government.

The politicians arrived at the APC secretariat at about 4.50 p.m. for a closed-door meeting with the party’s National Chairman, John Odigie-Oyegun, and some National Working Committee members.

Before the group left the secretariat at 5.15 p.m., one of them, Sen. Ali Wakil (APC/Bauchi-Central) told newsmen that issues discussed at the meeting revolved around non-payment of workers’ salaries and non-utilization of bailout funds.

“You know that Bauchi is an agrarian and civil service state and we must do everything to see that workers are paid as and when due.

“We are not comparing ourselves with Osun or Edo or other states that have backlogs of nine months; it is not our business.

“Our people must be paid as and when due and the remaining balance of the stipends must be paid and all the unending verifications must end”, Wakil said.

Also speaking, Senator Suleiman Nazif (APC/Bauch-North) revealed that the state chapter of the party was not at peace.

According to Nazif, “There are so many issues, but these are party issues and we felt that there was a need for us to come and discuss with our leaders and those issues are being handled.

”The national chairman has assured us that he will take a drastic measure immediately and address the APC Bauchi pending problems”.

The senator, who earlier in the day accompanied the Speaker on his visit to the Aso Rock Presidential Villa to meet with President Muhammadu Buhari, denied that the visit to the party secretariat also had something to do with the 2016 budget padding allegation against Dogara, saying “no, no, no, it is not about padding; it is about APC Bauchi politics”.

On the allegation that he and Dogara were sponsors of the crisis in the state, he said, “it is not about 2019.

“It is about solving the APC problem in Bauchi and ensuring that APC remains united in Bauchi and as you are aware, APC’s strongest hold in the North is Bauchi as far as northern politics is concerned.

“So, there is a dire need for us to come to the national secretariat and we can assure you that the national chairman is on top of the matter.

“We will go back to Bauchi, to our key supporters and tell them exactly what transpired.