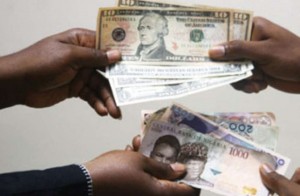 The Naira was quoted at an all-time low of 409 to the dollar on the parallel market on Thursday.

Nine banks were suspended from forex trading by the Central Bank of Nigeria on Tuesday, although UBA was readmitted after making a payment. This made dol­lars harder to obtain.

Traders said the currency fell due to the impact of the suspensions and also the slump in the price of its oil exports.

President of the Bureaux de Change Association, Aminu Gwadabe said, “The suspension of some banks from transaction in the forex market has re­ally increased pressure on the market.”

The suspended banks have however reacted to the CBN action.

Their executives have been meeting with CBN officials in order to resolve the forex issue as some of the affected banks have dropped in shares even up to 7.8 percent.

According to Reuters, Skye Bank fell the most, shedding 7.81 percent. Then followed Fidelity Bank, down by 3.0 percent. First bank Holdings shed 1.9 percent while Dia­mond Bank and FCMB were down 0.8 percent.

The falls pulled the main index down 1.8 percent.

Currency forwards have however put the Naira at 344.50 to the dollar in one months’ time.