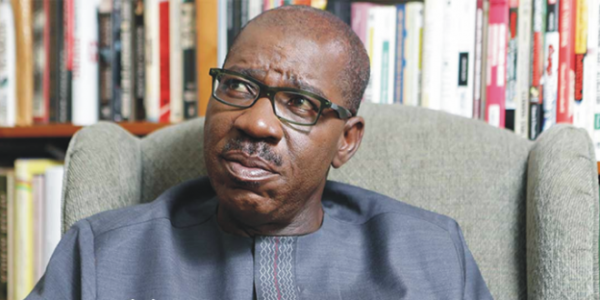 Indications that the All Progressives Congress, APC, is going into the September 10, 2016 governorship election in Edo State as a united force came to the fore yesterday when the Deputy Governor, Dr. Pius Odubu, campaigned for the party’s flag bearer, Godwin Obaseki, in Orhionmwon Local Government Area of the state.

However, all the rancor that trailed the outcome of the primaries was left in the past as the deputy governor assured people of the local government area that the agenda of the APC governorship candidate is to create prosperity for the state.

Odubu, who spoke at the APC ward campaign at in Ugo’niyekorhiomwon, said if elected as governor, Obaseki will not fall short of the people’s expectations as he has worked with the government in developing the communities in the state.

He also urged the people to ignore the political gimmicks of the PDP as they are up to no good, assuring the people of Orhionmwon that APC leaders in the area will ensure that Obaseki’s promises are brought to bear in the lives of everyone.

“Obaseki who is coming to take over from our governor, comrade Adams Oshiomhole has said he will provide stable electricity for you. He was able to do roads, he will fix the light. What you people will do is that since he is working for us, the vote in this entire area should all go to the APC. If you vote for the APC we will be with you to ensure they fulfill on their promises.

“The road in this area is the longest in Edo State, in those days it was not like this. Oshiomhole has worked, Obaseki that is coming will work more than him.

“You should not allow the PDP to tell you what they are not capable of, we (APC) are in this town and we will develop the area to the fullest”, he said.

Speaking shortly before the ward to ward campaign of the APC in Orhionmwon, the Enogie of Ugo’niyekeorhiomwon, His Royal Highness Chief Edugie Ogierhiakhi Ogiugo, in company of the Enogie of Ugboko, HRH Solomon Ewemade and other top palace Chiefs, urged Obaseki to follow suit the development Governor Adams Oshiomhole has done for the entire state.

HRH Ogiugo commended Oshiomhole for a job well done and prayed for him and the APC candidate.

On his part, Obaseki promised to decongest the high traffic in the city by opening up new towns through infrastructural development and establishment of industries that will give every community in the state a sense of belonging.

The APC flag bearer, who sought the support of the traditional institution in the provision of security, disclosed that investors are ready to come and invest in various parts of the State.

He said, “The next state we are on to now is going to be of different challenges and that is why I have come here to solicit your support. The next phase is where we now begin to use the roads and schools to our development. We will post more teachers to our schools so that we can provide quality education but more importantly we need to expand the economy of our state and bring back our population.

“We have oil and gas around here it is now time to build new towns around us”, he stated.

On his part, Governor Oshiomhole said the state government will immediately commence the reconstruction of dilapidated structures in two primary schools in the Local Government Area, namely, Adanako Primary School, Ugo and Idumogo Primary School, Urhonigbe, in continuation of the state policy of upgrading educational facilities for optimum teaching and learning.

Speaking at the APC governorship campaign rally at Adanako Primary School, Ugo, Governor Oshiomhole said, “my farewell gift to this Ugo, before I leave offtice, even before the election day, is I will reconstruct this dilapidated school building and put red roof. As for the already completed one, we will supply furniture by next week. Our children must sit comfortably on good chairs so that they won’t need to wash their school uniform every day. If the classroom and the floor are clean, school uniform won’t be dirty every day”.

He said, “The work that is yet to be done is much. As we speak, we are working at Iguododo Pimary School and many other places. In Orhionmwon, I think we have done about 25 schools. We worked in every ward. We have shown you our candidate. He has been working with us for the past eight years in this government. He knows what we have done and what we have not done. Godwin is your son. He knows how we have been working, and so, he must continue to do the work”.

At the APC rally at Idumogo Primary School, the Governor said, “Let me tell you what I mean by continuity and consolidation. We say this one so that people will not forget. Now, we are going to pull down this roof and raise the walls and put red roof, so that on the whole of this place, there is no more evidence of PDP. I will start it and Godwin will finish it. That is what we mean by continuity: continuity of red roofs, continuity of good roads, continuity of tap water and continuity of providing jobs for the youths and support for women”.

According to Oshiomhole, “The other one is that rubber plantation that has already been given to a new investor who will rebuild it, and we have given them additional land. I have already signed the certificate of occupancy so that they can return back to work. When it is working, youths will be employed and even women will be cooking for factory workers and money will circulate.”